Gaining popularity this year, native advertising is currently one of the most discussed topics in the industry. Though there isn't one simple definition, the IAB has recently issued a Native Advertising Playbook, summarizing the goals and executions of native ad units:

Native advertising is a concept encompassing both an aspiration as well as a suite of ad products. It is clear that most advertisers and publishers aspire to deliver paid ads that are so cohesive with the page content, assimilated into the design, and consistent with the platform behavior that the viewer simply feels that they belong. To achieve this, advertisers deploy tactical ad products, and the IAB Native Task Force has identified six categories of ad units most commonly used today in pursuit of this goal.

The six categories mentioned by the IAB include paid search units, promoted listings, recommendation widgets, and even custom units. Though the definition and opportunities are broad, many publishers are now offering ad units positioned as native advertising. Marketers are taking advantage of these opportunities, and are seeing positive results. 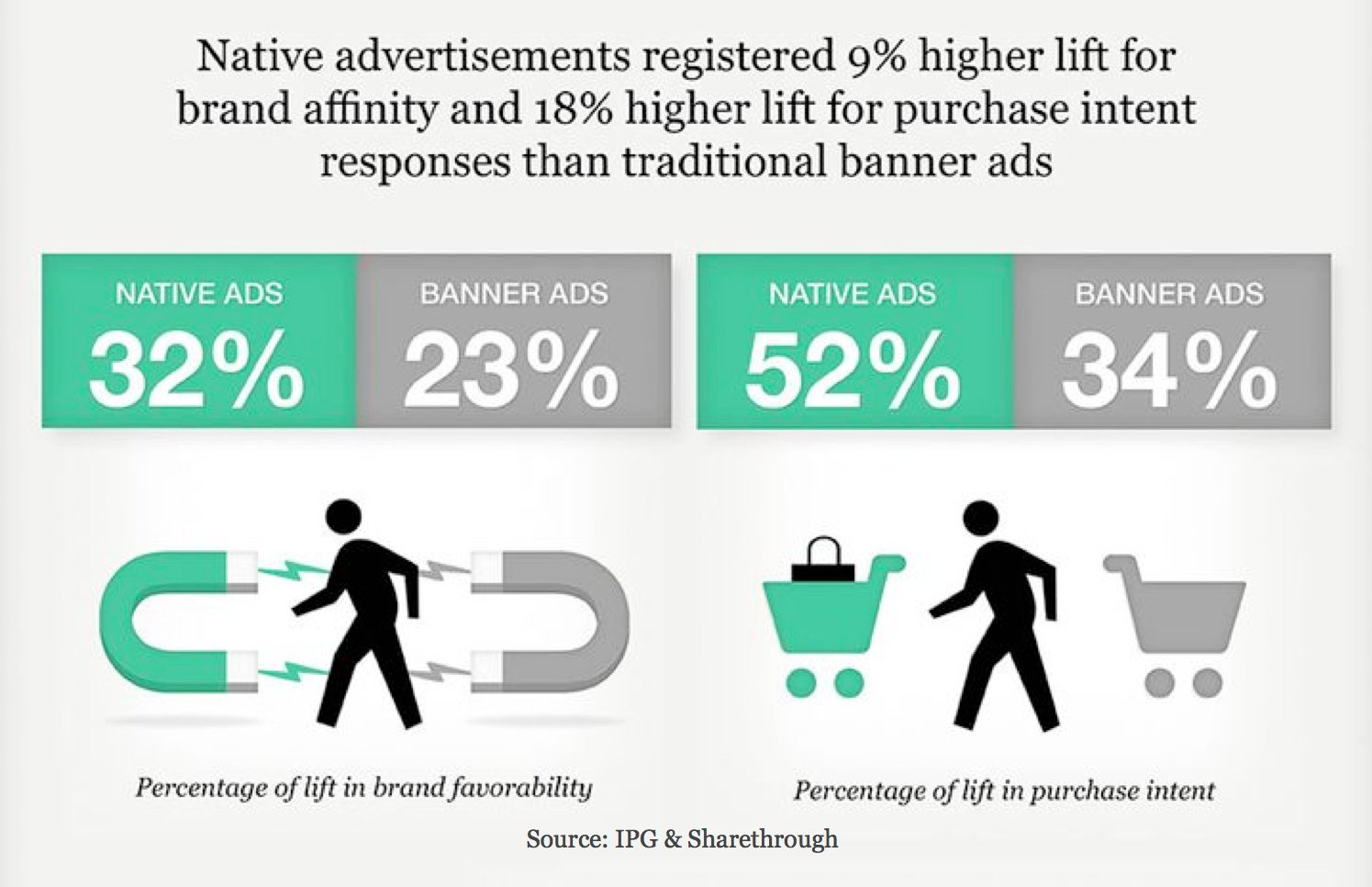 While native advertising ideally provides a seamless ad for users and boosted results for advertisers, the public has several concerns regarding this new type of marketing. VentureBeat recently reviewed the four big threats facing native advertising:

Readers reject native advertising
Those of us who are in the industry buy-in to why native advertising makes sense; However, when I explain what I do to friends outside the publishing industry, the first response is always “so you are basically tricking users into clicking on ads?” Point being, perception matters...

Earlier this summer, IAB and Edelman released new research on what consumers actually think of native ads. Results of that research showed that well-executed native advertising can boost the credibility of a publication’s site, and that site’s credibly can, in turn, boost the perceived credibility of sponsored content it features. More specifically, sites saw a 33 percent lift in perceived credibility of native ads when those ads appeared on news sites considered to have a high level of credibility. Also, 54 percent of respondents from the research stated that they look favorably on news sites if its sponsored content was relevant to the content they were already reading.

FTC may regulate native advertising
Likely the biggest threat native advertising faces for content marketers could be federal interference — such as the Federal Trade Commission (FTC) introducing a set of regulations for the industry. In December of 2013, the FTC hosted a workshop to discuss the impact of native ads, which produced some mixed results. They said some native ads are unlawful, which gives me reason to pause. This is a big reason for why self-regulation within the industry is so critical, and the IAB’s native ad playbook is a good place to start.

The lowest common denominator wins (again)
What makes content marketing successful today is when clients and their agencies have a direct, one-to-one, relationship with the publisher. The best content programs are built based on the client’s objectives as well as what the publisher’s audience is receptive to. Every publisher’s site is different, or at least that’s the promise given to readers who spend hours consuming content. I think the moment the same sponsored content appears across multiple publishing sites, that site now risks to lose the trust and uniqueness they first touted when building their audience.

Given these concerns, a positive future for native advertising will depend on publishers developing high quality, unique, reader-friendly native advertising opportunities, as well as limited interference from the FTC. We'll be watching (and testing!) to discover what the future holds for this much talked about opportunity in 2015.