The majority of Americans are using social networks these days, but who is using which networks, and how? To begin to answer the question, Pew Internet recently released data from a survey of Americans on their use of various social networks from Facebook to Tumblr. The study found that 67% of internet users use at least one social networking website. Twitter and Instagram showed female, urban, and African-American skews, while Facebook and Tumblr reached a broader 18-29 audience. 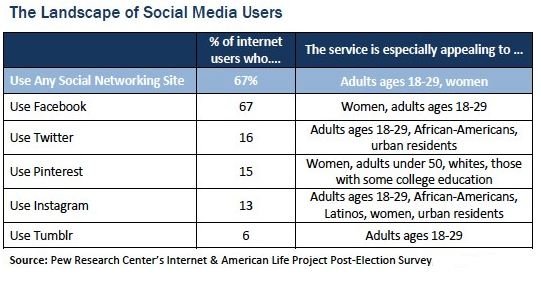 While the landscape of social media users shows variation, the usage of social networking websites is still dominated by Facebook. comScore reports that Facebook accounts for 5 out of every 6 minutes spent on social networking, but is the company doing enough to provide effective ways for advertisers to reach this massive user base? Agencies are looking to mobile, the ad exchange, social gifting/commerce, and social search as areas to drive revenue on Facebook in 2013. 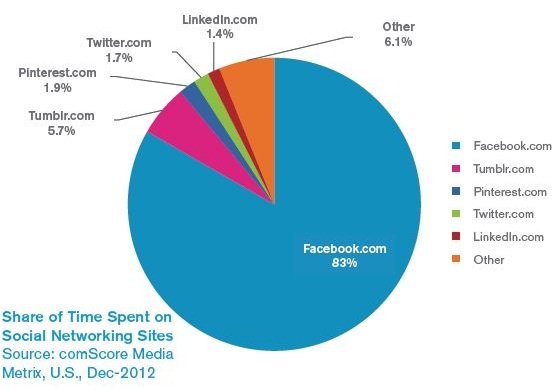 In terms of advertising, Facebook, Twitter, and LinkedIn remain the leaders with their built-in paid advertising opportunities. Other social networks may not offer paid advertising options, but their visual style is attracting a growing user base. Instagram, Pinterest, and Tumblr each gained more than 10 million visitors over the course of 2012, according to comScore. Tumblr had the largest audience with nearly 31 million visitors, while Pinterest and Instagram both saw a 284% YoY increase which drew over 27 million visitors each. In recent months, the Monitor has reviewed how marketers can use Pinterest, Tumblr, and Instagram for organic advertising efforts.

Will Facebook retain its overwhelming dominance of the social space in 2013? Will the trend towards the visual social web continue? We'll be watching.