The Oscars saw some success with the best performing telecast since 2007, but how did the advertisers fare? Analytics provider Networked Insights took a look at 8.9 million conversations on Twitter and Tumblr which focused on Oscars advertisers. According to AdAge, the study found that:

While many brands were discussed on Twitter, few advertisers took the initiative to promote engagement with social media in their TV spots. A report from Altimeter found that 75% of ads promoted second-screen integration, with the majority of these advertisers only promoting a URL. Less than a quarter of the ads integrated Facebook or Twitter, and most focused on displaying a small social network icon instead of a specific URL. Though the volume of conversation on Twitter was extremely high, only 13% of ads integrated a hashtag- potentially a missed opportunity. Weeks earlier, 31% of Super Bowl ads included a hashtag. 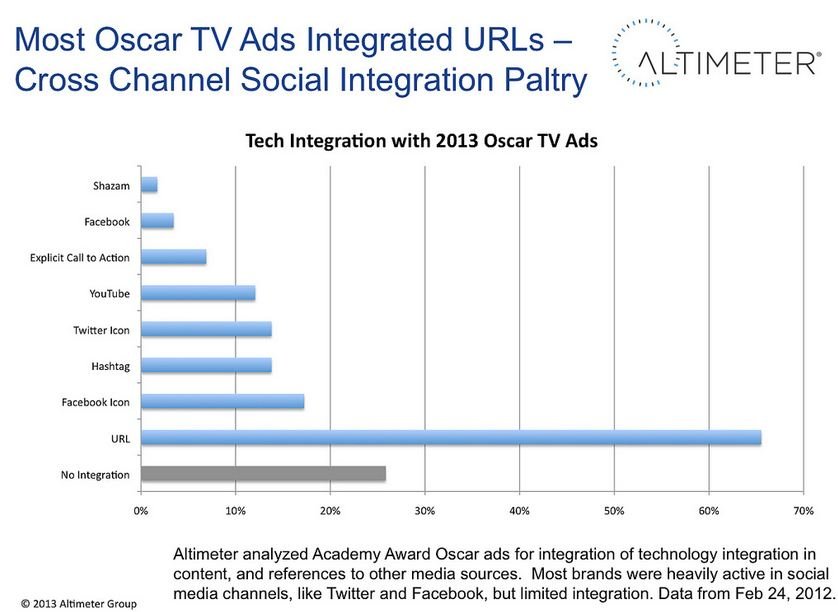 Some brands tried to capitalize on the Twitter conversation, including Oreo who once again sent timely tweets relating to the ceremony. Tweets included references to best nominated film nominee Wreck It Ralph, the James Bond tribute, and even to AMC's hit series The Walking Dead, which was airing at the same time. Will TV ads continue to focus on URLs, or will advertisers start to take advantage of the high levels of social media conversation during popular telecasts?