You may have heard of Tumblr or seen someone scrolling through their dashboard, but what is it exactly? How is it different from all the other social networks? Maybe most importantly, how can it be used for marketing? Tumblr is a microblogging platform and social networking website. Registration is fast, and users can easily start following other users and reblogging content. Tumblr blog posts are brief and often solely images which creates a visually-appealing environment similar to Pinterest. While Tumblr itself currently offers no paid advertising options, some businesses have started to use Tumblr as an organic marketing and promotional tool.

Like any social media platform, demographics are key. Tumblr’s demographics show ~60 million monthly visitors, a younger audience, and a slight female skew. It is also important to consider the nature of the platform. Tumblr users are quickly blogging and reblogging whatever catches their eye. The user feed moves quickly and posts are short-lived unless they are continually shared, similar to Twitter. 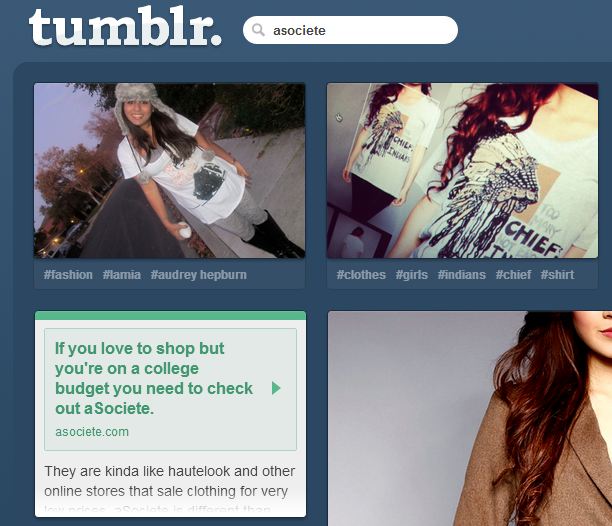 ClickZ recently reviewed how brands, especially small businesses, have begun taking advantage of this platform with positive results. Discount shopping site aSociete partnered with Tumblr bloggers, and as those bloggers wrote about aSociete the website saw an increase in signups. They received over 5,000 users from one organic post. MeebleMail, a company which creates personalized email stationary, thought Tumblr would be a positive fit for their demographic of women interested in style and design. The company found success posting images of their email stationary and other items from their design partners, along with short captions. Pilates studio FORM Pilates uses the platform to extend their reach by sharing advice and inspiration around fitness including recipes and inspirational images.

There is additional strategy behind Tumblr aside from simply posting images. Like any social network, the most value comes from building relationships with other Tumblr bloggers. Tumblr users with thousands of followers can be targeted. Posts can be tagged so they appear in searches. Relevant content can be linked and reblogged. In the end, success on Tumblr is found like success on most social networks- through posting, promoting, and participating in the community.