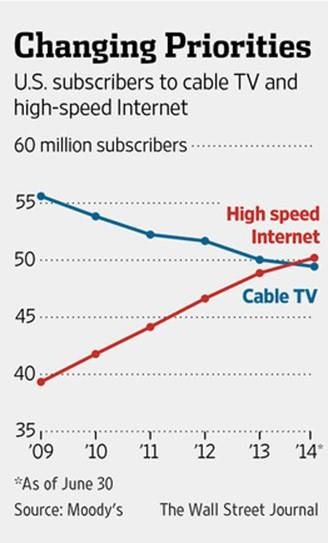 The language of media has been shifting for years. The way we described our consumption of sitcoms, music, and news was defined by the way we would consume them: watching television, listening to the radio, reading the paper. Now, while we're doing many of the same activities, the language has changed because our devices have changed. We watch Game of Thrones (on a television via cable? on a tablet via HBOGo?), listen to Nicki Minaj (on terrestrial radio? satellite radio? Spotify?), and read the New Yorker (the print magazine? on their website?). This reflects media's key transition to digital.

This shift to digital is making an increasingly large impact on television. The ability to 'unbundle' television services is closer to becoming a reality as both HBO and CBS recently announced standalone internet streaming services for their networks. This an expected shift as networks respond to the a changing media landscape where cable subscriptions are decreasing while internet continues to take top priority. While digital has shaped the language of media and is altering the consumption of television, it will now begin to shape television advertising. This week, AdWeek reviewed four ways in which this transition is likely to occur:

For advertisers, this all provides a greater ability to customize and target messaging. For consumers, it may mean more relevant television advertisements, but they come with additional privacy concerns. All of these opportunities are likely to roll out in the coming months and years, but we know for sure that the future of television is digital.