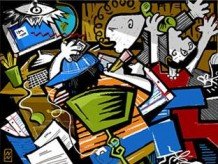 We live in an era of multi-tasking. We send emails while talking on the phone. We text nonstop during every activity imaginable. We play with our Ipads while watching TV….the list goes on.

In the early days of TV, program attentiveness was at an all time high. It was an era of family “appointment viewing” of top rated programs such as Ed Sullivan, Bonanza, Gunsmoke, Man from U.N.C.L.E, and many others. In families across the nation people staked their claim on the couch or easy chair – and they watched the next 30 or 60 minutes of TV with their undivided attention.

With all of these old references we may as well also quote Bob Dylan -  the times they are a changin’- and our TV habits are no different. While TV viewing as a whole remains strong, obviously the “networks” no longer dominate viewing. Ben Cartwright is long gone, Eddie’s father is done courting, and Illya Kuraykin from U.N.C.L.E. left the agency long ago (although he lives as “Ducky” in N.C.I.S). I guess David McCallum likes acronyms.

What is surely gone is the family ritual where all are gathered around the tube dutifully watching the program and the sponsors’ commercials. The American public is multitasking like crazy and this is most prevalent among a younger 18-34 audience. According to ADWEEK/Harris Interactive data from May 2011, it’s amazing that this audience even recalls anything from the TV programs they watch. According to the data, while watching TV 18-34 year olds also:

And further, this behavior is hardly limited to this demo.  It’s pretty obvious that the multitasking skills of everyone are improving dramatically.

While there still is value in advertising consumed while multi-tasking (or fast forwarded with a DVR), creativity of messaging is more important than ever. Powerful messages are critical if advertisers want to truly engage and influence the audience.  Media tonnage alone will not help advertisers achieve their business goals with poorly crafted ads in a multitasking media consumption environment. Developing a media program with actionable media, and messages that truly engage audiences will always be far more successful in driving business.

What are the most interesting things you do while watching TV?