With the popularity of the Fitbit, in addition to the release of Google Glasses and Apple Watch, the time of Wearables is now. The question remains, however; will these devices continue to gain steam and like the iPod’s first release, or will it fade away into obscurity like Furbees? When it comes to sales, the market has exploded over the past year. A report by IDC shows that from the middle of 2014, sales have increased by 223%. This is despite the relatively underwhelming sales of the Apple Watch, which has not received the reception that its predecessor, the iPhone, had.  However, the Apple Watch is still only second to Fitbit in sales for Q2 2015. Chinese company Xiaomi also has carved out its own significant market share so far this year. 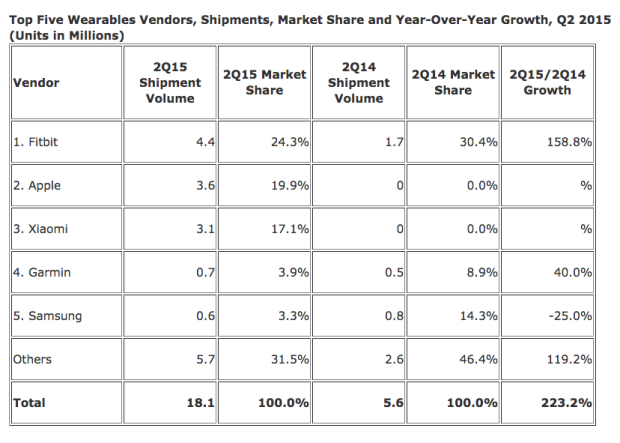 Despite the high increase in sales, reports also suggest that interest in wearable technology is actually waning. According to a recent report from Argus Insights that examines customer reviews; demand for Wearables reached a peak in January of this year, but has since fallen off significantly. With the main product being fitness related, most consumers tend to lose interest in their device. The report suggests that on average, most consumers set aside their device after only a few months. Also, the consumer base for smart devices tends to be very limited at this time. This lack of interest could suggest that wearable technology is just a fad and not a sustainable technology. Apple, however, has other ideas with their smart watch. With the product just releasing in March, there is still much time for Apple to increase the draw to their product. While the Fitbit is limited to what the product can achieve, Apple is able to incorporate much more into its device. The WatchOS 2 update that is being released this fall will allow developers to run apps natively through this device. This allows the user to connect even deeper into their device, similar to how the iPod transformed into the iPhone and iPod Touch. The question remains as to how this affects advertisers. With the popularity of Fitbit, advertisers were left in the background as there were no capabilities for companies to take advantage of.   Now that Apple is leaping to the forefront of this technology, the possibilities have started to open up exponentially. Not only will companies be able to advertise through the various apps that would be available, but multi-device connectability becomes even more prominent. Since the Apple Watch can be used as an extension of the iPhone, the amount of information that can be gathered on consumers increases greatly. In addition, being able to target users across both devices offers both a targeted and prominent tactic. With the Fitbit interest tailing off, and the release of the more connected Apple Watch, look for consumer interest to increase and advertising opportunities to follow suit.