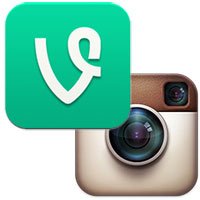 Social was initially about sharing messages between contacts. Pictures were then introduced and flourished on Facebook. Soon came Instagram, Pinterest, Snapchat, and other photo-centric social services. What's next? Video.

First to the video playing field was Vine, an app for Android and iOS which lets users create and share six-second looping videos. Though there is a short time limit, users can start and stop recording as much as they like within the time frame. Videos on Vine can be shared to Twitter and Facebook, and also include hashtags to enable users to track trends and easily search content. Vine was purchased by Twitter in January of 2013. "When Facebook bought Instagram, I said we’re not going do what those other guys did. We’re looking for the next thing," Twitter CEO Dick Costolo said. "We all agreed that this is the next thing down the road."

Last week, Facebook took a page out of Twitter's playbook by adding video functionality to Instagram. Like Vine, Instagram Video offers availability on iOS and Android, hashtag support, and the ability to clip videos. However, Instagram takes video a step further. Instead of six seconds, Instagram Video features a fifteen-second limit, an important consideration for advertisers with spots of that length. The platform also offers video cover frames, custom video filters, a video stabilizer on iOS, and direct integration with the established network on Instagram. Edelman Digital created the chart below to show the key differences between video on Vine and Instagram.

Instagram had about 50 million registered users when it was acquired by Facebook in 2012. The network currently boasts 130 million monthly users, with over 16 billion photo shares. Now, 5 million videos were uploaded within the first 24 hours of Instagram Video going live. Brands including Burberry, ESPN, and GE took part in the initial video sharing. If Vine and Instagram are any indication, the trend towards social video does not appear to be slowing anytime soon.