Social media has long been one of the largest growing platforms for advertisers over the past 3 years.  Facebook has led the charge with its innovative nature, but companies like Twitter, Snapchat, Pinterest, and Instagram (prior to being purchased by Facebook) have continued to revolutionize their platforms in order to attract advertising dollars to their respective platforms.  While Facebook has maintained the lion’s share of ad spend in the social media space, the big rise over the past 12 months has been with video, led by Snapchat and Instagram. 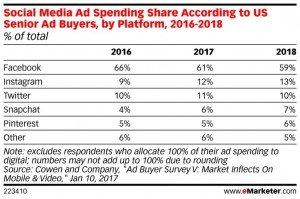 Since its inception, Snapchat has skyrocketed in popularity as it has reached over 100 million daily active users and over 10 billion videos per day are consumed.  As a result, advertisers have flocked to the platform.  However, due to the limited video ad length on snapchat (10 seconds), the ability for advertisers to engage the consumers in their brand is hamstrung to a certain degree.

This is where Instagram has taken advantage and started to surpass Snapchat in the video ad space.  By extending the maximum length of the video ads from 15 seconds to one minute, it allowed companies to tell a longer story if they desired.  This change catapulted more advertisers onto the platform and engagements have more than kept up during this time-period.  Some companies have reported a 200% improvement in engagement while only increasing the video output by 43%.

What does this tug-of-war between Snapchat and Instagram mean for video in social media?  The various improvements by the platforms have spurred growth and spend that is expected to continue.  From Q1 2016 to Q1 2017, the percentage of video spend among all social media campaigns has risen from 16% to 29%.  After a brief plateau, this number is expected to rise again as more video opportunities become accessible.  Instagram has already started to open up video content to sponsorships, which various companies have recently taken advantage of.  As a result, expect video to become the dominant force among social media platforms and for these platforms to maintain their standing in the space by continuing the revolution of video ads.