For some time, we as advertisers have been living under the old adage that viewership plummets when nice weather rolls around and therefore no one is watching the programs they’d most likely advertise within.  Yes, this is certainly true back in the days of when 4-books, sweeps and prime repeats were relevant to a TV advertiser.  With most markets looking at more in-depth monthly books and Nielsen’s recent methodology/reporting shift in larger to mid-size markets who may not be LPM markets, TV reporting is trying to be more sophisticated for advertisers constantly looking at deliveries/ROI. Networks have adjusted their programming grids in the past 10-15 years to include first run prime during summer months.  Couple that with the fact that news dayparts are never repeats, and warm weather is no longer a TV advertiser’s foe.

A recent look at PUT levels (Strata LPM data) in MayoSeitz Media’s home market of Philadelphia shows there certainly is seasonality to TV viewership, but maybe not as great as people assume.  Below is a yearly trend in PUT levels (against one of the hardest TV demo’s to reach, A18-49) from the past 4 years and surely one can see the shift in viewership over the course of the year.  While there is certainly a shift, a 22% decrease in viewership from the highest month of PUT levels to the lowest month of PUT levels, it is also an aggregate of all dayparts from 6a-midnight.  Looking at a higher HHI demo of A25-54, average PUT levels during summer months are 8-12% higher than the A18-49 demo.  It’s also hard not to ignore the elephant in the TV advertiser’s room and that is the continual erosion of hard wired viewership thanks to the likes of any service providing video content over the Internet of Things (IOT).  This is the reason that good media agencies do not look solely at broadcast/cable networks but broadcast/cable networks complimented by digital video when evaluating video assets/tactics. 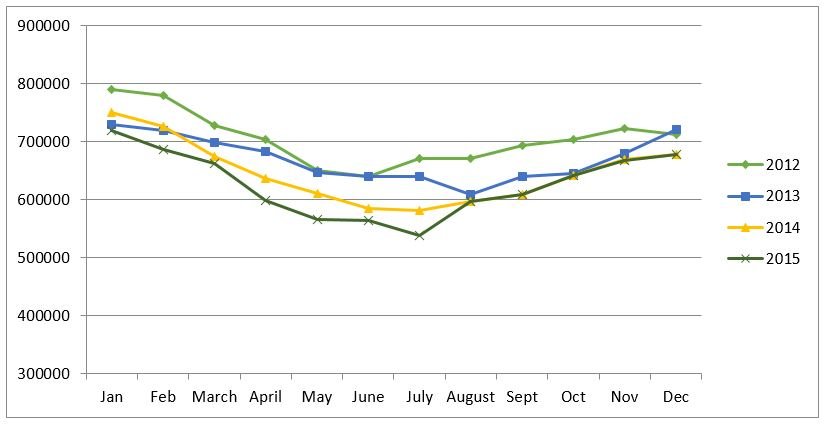 Our advice, embrace summer programming and possibly adjust your strategy.  Look at specific dayparts that are not repeats, look at shows that are first run and take full advantage of the less expensive rates that networks still charge in Q3, July through September.  Include an online video component and chances are you will still reach your target audience in an efficient and effective way with sight, sound and motion over those dog days of summer.  In fact, this summer will see a lot of tuned-in households during the Summer Olympics in Rio (caveat here, those efficient Q3 rates are out the window during that period).