Nielsen's Cross-Platform report provides informative data on the changes in the American consumer's media behaviors. Their latest update to the report was released this week and features new insights on Zero-TV households, or those who no longer watch traditional television offered by cable or satellite providers but who tend to stream video online, via computers, smartphones or tablets. More than 95% of Americans get their information and entertainment by watching TV in their living rooms through traditional cable or satellite options. However, 5% do not fit that mold, and that group is growing. 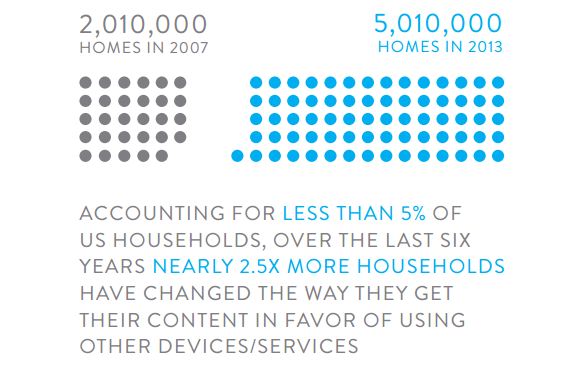 According to Nielsen’s Fourth-Quarter 2012 Cross-Platform Report, the U.S. had more than five million Zero-TV households in 2013, up from just over 2 million in 2007. The group gets their news and entertainment from non-traditional TV devices and services like computers and tablets. While these households don't fit Nielsen's historical definition of a TV household, they still view video content and are still valuable consumers. Although these households aren't viewing content in a traditional way, more than 75% of them still own at least one TV and use it to play video games, watch DVDs, or connect to the internet. The study also found that nearly half of these homes watch TV content through subscription services, like Netflix. The major reasons Zero-TV homes reject traditional television services are cost (36%) and lack of interest (31%).

The study also took a closer look at the average American's daily media habits, finding that live TV is still king. The average person spends over 41 hours weekly engaging with content across all screens, including live TV, DVR playback, DVDs, and video games. The majority of those hours are spent in front of a TV, and almost 9% of that time is spent watching time-shifted content. The study also found that viewing behavior varies by ethnicity, with the average African American viewer watching increased amounts of content per week, and Hispanics and Asian Americans skewing below the average.

While the study reveals that Zero-TV households are a small percentage of overall viewers, the number is increasing and it will be important to keep tabs on the trends of this unique demographic.