The 2014 World Cup began less than a week ago, and a report by Adobe is already predicting that this will be the most social sporting event in history. According to the report, by mid May, a month prior to the start of the tournament, the 2014 World Cup had already topped both the Sochi Olympics and the Super Bowl in social media mentions across multiple social platforms such as Facebook, Twitter, Tumblr, and Instagram.  By June 5th, there had already been 69 million social media mentions across 230 countries, engaging 90% of the globe in the World Cup conversation.

However, this doesn't come as a surprise to the digital marketing world. Two months prior to the start of the tournament there were already projections of the 2014 World Cup making social media history due to the fact that the Latin American population is so highly engaged on social media. A study conducted by IMS found that 94% of internet users in Latin America are active on social media. When it comes to the country of Brazil itself, the Wall Street Journal dubbed the country the "Social Media Capital of the Universe" with 98% of the country's internet users active on at least one social media platform. 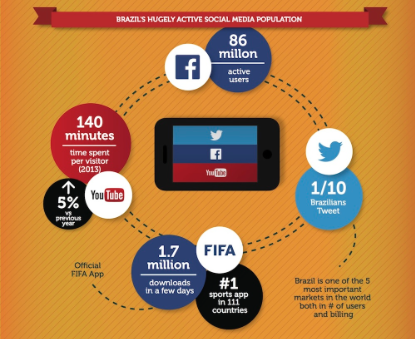 The country's active social media population could have been one of the major factors in the decision to make all 12 World Cup stadiums equipped with Wifi and 4G technology, a first for the world's largest sporting event. Throughout the remainder of the World Cup, Adobe will continue to report on social media trends, viewership statistics, and real time, in-stadium Tweets and Foursquare check-ins. With such staggering numbers already being reported, they predict that by the end of the tournament total World Cup social media mentions could potentially exceed those of the 2014 Super Bowl and Olympics combined. 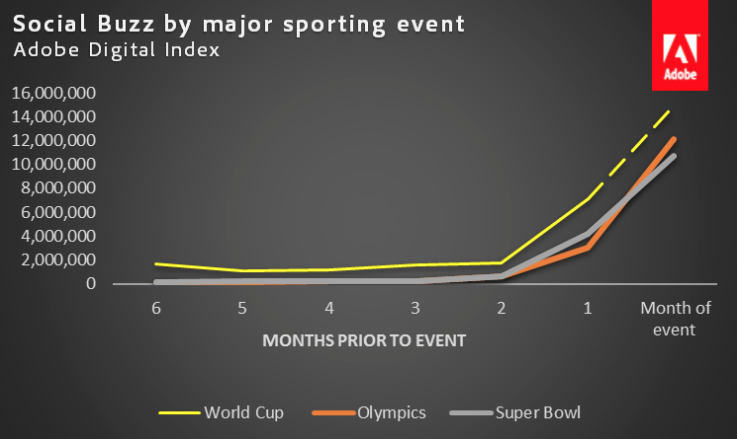 With advertisers starting to increasingly take advantage of the rapidly growing amount of advertising capabilities offered by social media on various mobile devices, it will be interesting to see how this will affect the way people view and engage with future popular broadcast programs such as other various sports programming, award shows, popular reality TV finales, pageants and parades. Will these findings be reflected in the broadcast advertising revenues? Will the value of sponsorship opportunities stagger?