Last week Google announced that it will enter the ad blocking arena, with plans to offer a built-in ad blocker for its Chrome browser in 2018. Actually, Google is referring to this feature as an ad “filter” more than an ad “blocker”. What’s the distinction? Google is comparing it to pre-existing features already within the Chrome platform that are designated to offer users warnings before they visit pages with malware. However, the functionality will be a default feature within the platform, so it is essentially an ad blocker.

According to NetMarketShare, Google’s Chrome dominates the internet browser market with nearly 60% share across mobile and desktop devices. eMarketer has a little more modest assessment of Chrome’s market share at 43%. But in both estimations, Chrome is the clearly dominant web browser amongst users. Therefore, as with most policies Google sets forth, this could have an industry-wide effect on the state of ad blocking.

Starting sometime in 2018, Chrome will utilize the standards set forth by the Coalition for Better Ads to determine unacceptable ads. To provide a better user experience, the CBA is concerned about limiting the amount of invasive ads which they deem as pop-ups ads, auto-playing videos w/sound, large sticky ads, etc. Where the CBA has focused on the invasiveness, there are professionals who feel the CBA should incorporate more provisions similar to what the IAB has instituted as part of their LEAN principals:

For example, where the CAB principals would block a pop-up ad but an ad that slows downloads via multiple calls for scripts would still be allowed. With the ultimate goal of providing web browsers with a more seamless experience, some believe the Chrome ad blocking update is not inclusive enough.

And that is a pivotal point as to the genesis of this idea. Google is jumping into a space where the percentage of ad blocking users is increasing in penetration. The below chart form eMarketer shows the YoY increase amongst percentage internet users who have adapted to using ad blocking technology: 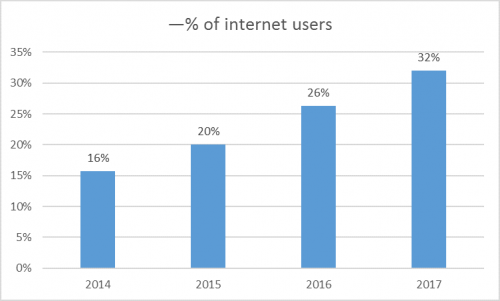 This YoY increase is mostly made up of users implementing an outside company’s ad blocker via a plug-in. A lot of said outside ad blockers will not only block the “invasive” ads the Chrome update looks to combat, but they block all types of ads. And this may be the crux in Google’s end game for implementing these changes in Chrome. In addition to the ad blocking tool, Google is also pitching publishers on a new tool it is calling “Funding Choices,” which is designed to combat the effects of ad blockers offered by other companies. If publishers enabled that feature on their sites, users with ad blockers turned on would be presented with messaging prompting them to disable their blockers to access the content, or to pay for a “pass” to remove advertising entirely.

The ultimate impact for advertisers should be nominal. The reason for stressing “should” is because advertisers should be utilizing vendors who already submit to IAB and CBA guidelines. The guidelines and principals for both are similar and fairly ubiquitous, so it is important that advertisers hold their media partners accountable and ensure they are following the standards the industry sets forth. Whatever changes that may occur, the preferred vendors will adapt to the new standards to ensure that ads are actually being seen. Therefore, the inevitable impact of should not immediately or drastically effect advertisers who already subscribe to the guidelines.