Almost one year ago, Microsoft released its Next-Gen video game system the Xbox One, which was in direct competition with Sony’s Playstation 4. Both sides concentrated heavily on marketing their product against the competition.  Microsoft’s tactic was to coin the Xbox One as an “all-in-one entertainment package”. With the ability to replace a home’s cable box, DVD/Blue Ray player, and stereo, and of course play video games, the Xbox One became a product that someone of all ages and demographics could use and interact with. Its homepage already offers video and banner ad opportunities among others, but the question remains: What else can it do?

The Xbox One has some unique abilities that impact the advertising potential. The system has the ability to run two programs at once on a split screen. So someone can watch live TV and surf the web or they can play video games while listening to music. In addition, everything on the Xbox One has the ability to be voice controlled so users can simply say “Watch TV” and the system will oblige. Finally, switching from one program to another is seamless as no loading or waiting screens are necessary. Every switch is instantaneous.  But given the diverse functionality of the product, what does the future hold for advertising possibilities?

First of all, let’s look at the TV function of the Xbox One. As it stands, the Xbox One acts in lieu of a cable box or DVR as a user can import their TV guide and watch live TV through the system. Just like a DVR, the Xbox One can pause, rewind, and record programs. But what does that mean for advertisers? Imagine someone is watching the football game on Sunday and a commercial comes on for a product. They can simply pause the football game through voice command and then ask the Xbox to bring up a separate screen so they can search for the product on the internet. This creates an instant reaction to a company’s advertisement. The same scenario could happen with functions like Hulu, Netflix, ESPN, and Skype. All it does is create the opportunity for a more immediate reaction to advertisements. 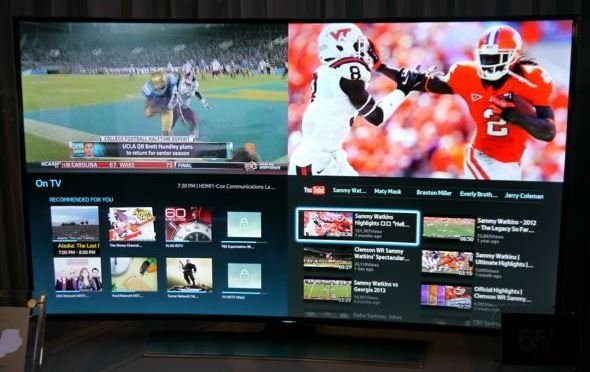 While the above scenario is something that can easily play out right now, let’s look at a couple future possibilities. One opportunity is for the Xbox One to take the initiative and “know” what ads are running at any given time on the system. If an audio ad is running for a certain product, the user could just say “more info” and the system would automatically bring up a page with information on the particular product. This could apply to TV spots, YouTube video ads, and any other medium. Another opportunity for the Xbox One to be more attractive to future advertisers is the camera and voice functions. As it stands now, the Xbox One can recognize voices and know what user it is interacting with. But what if Microsoft can take it one step further and use the camera to recognize everyone in the room. They could then serve ads to target the dad who likes to golf and the daughter who likes horses when they watch television together but then later that day target the mom who is an avid reader. These scenarios offer immense possibilities for companies when it comes to developing creative, reaching target audiences, and tracking ad interactions.

Finally, let’s look at the one thing that everyone associates the Xbox One with, videogames. Videogame producers have long pushed back against including any sort of advertisements in conjunction with their games. One opportunity that is there however is with the dreaded loading screen. Some videogame companies use interesting graphics, some use music, and even some use little mini-games, but all of these developers struggle with how to load the game and certain levels without boring the player or taking too long. Here is where Microsoft and the Xbox One could step in and offer the ability to advertise with short video segments during this down time. The player could then interact like he or she does with any ad and simply pause the game if they wish to learn more.

The Xbox One is certainly an interesting device for advertisers, not only for the placements it can provide, but how it can impact any other advertisements that may be shown. Since the Playstation 4 concentrated mostly on the videogame aspect, it does not have many of these capabilities. It does not have the voice control, split screen, or the home media aspect. This limits its appeal as an advertising source for the future though the potential is still there if Sony wishes to update its console to drive advertising. For the moment though, Microsoft and the Xbox One seem to be ahead of the game. Only the future will tell if this is a fad or something that will be built upon.