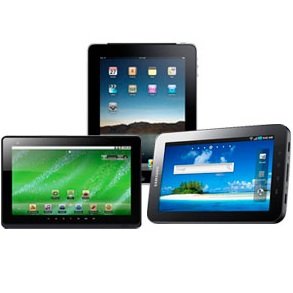 Tablet ownership continues to rise in the U.S., with a quarter of American adults owning the device as of this month. This time two years ago only 4% of Americans owned tablets, according to Pew Research. As interest in these devices skyrockets, manufactures are constantly striving to reinvent their devices to take advantage of the high level of consumer interest. Three of the biggest players in the tablet space (Apple, Microsoft, and Amazon) are each currently reinventing their tablet offerings.

Microsoft's first step into the hardware space went on sale earlier this week online and will be available for purchase in-store on October 26th. The base model costs $499, or $599 with a dual keyboard/cover called the Touch cover. Aside from the unique cover, the key differentiator of this tablet is its operating system. As opposed to Apple or Google tablets which run the mobile-specific iOS and Android operating systems respectively, the Microsoft tablet runs a stripped-down version of the Windows 8 desktop operating system. This should make for an easy transition by users who already own a desktop computer running Windows 8, but will the rest of the market show interest?

The most popular of the tablets, Apple's iPad is currently on its 3rd generation which was released earlier this year. The big news from Apple is scheduled to come on October 23rd when a long-rumored 'mini' iPad is likely to be announced at an event in California. There are many rumors about the new device, including various connectivity options and display specs. What is known is that the new device will likely be notably smaller than the current iPad, likely just under 8 inches. Stay tuned on the 23rd for full details on what may be the big holiday gift of the year.

While a variety of manufacturers have developed tablets running Google's Android operating system, the most popular of these is Amazon's Kindle Fire. A more robust version of the original Kindle e-reader, the Fire offers an experience similar to that of the iPad in a slightly smaller size (7"). Last month, Amazon announced the Kindle Fire HD which offers a 8.9" screen and 4G-LTE at a $500 price point- all comparable to the new iPad. The slightly-smaller Kindle Fire is available for under $200, making this device more attractive to many consumers.

While Apple currently holds the largest market share, it is deteriorating due to competition. Pew Research recently found that just over half of tablet owners reported owning Apple's iPad, compared with 81% a year ago. Currently, 48% of tablet owners now own an Android-based device, including the Kindle Fire. Tablet ownership nearly doubled after last holiday season, and tablets will likely be another popular gift in 2012. We'll be watching to see which devices reign supreme.