As fans young and old poured onto Broad Street to celebrate the win, advertisers in the Philadelphia DMA were continuing their marketing plans to align their brand with a champion.

It starts with the Super Bowl MVP who is always awarded a free trip to Disney World. Nick Foles, the Philadelphia Eagles quarterback, won the award this year and promptly left Minnesota without his teammates and headed directly to Florida to celebrate in Disney World. It is a time honored tradition for said MVP to proclaim “I’m going to Disney World” after the award and game victory. Disney, however, is a National brand. What is the impact on the local level? How will Philadelphia based brands react to the biggest win in Philadelphia history?

VISIT PHILADELPHIA®, which has a natural tie to the Philadelphia Eagles, took full advantage of the excitement. The Eagles winning the Super Bowl has a direct effect on tourism into Philadelphia, especially in regard to the parade. VISIT PHILADELPHIA®’s billboards displayed support for the team while increasing awareness of their brand. If you drove through Philadelphia the week before and after the Super Bowl, you may have seen some of their billboards: 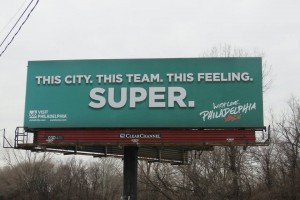 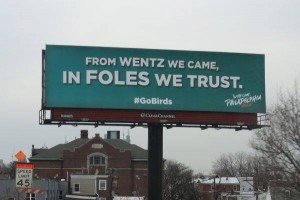 VISIT PHILADELPHIA® was not the only brand to realize the importance of the Eagles championship run. The Philadelphia Auto Show held their event from 1/28 until the start of Super Bowl on 2/4. The Auto Show took note of visitors wearing Eagles gear all week and created a “Green Out” on the last Saturday of the show, the day before the Super Bowl. They encouraged all visitors to wear their Eagles jerseys, hats, t-shirts or any other Birds attire they have. As Visit Philly did, the Auto Show used Digital Outdoor to push both their “Green Out” message and show support for the Eagles: 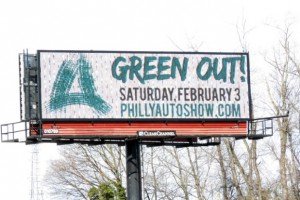 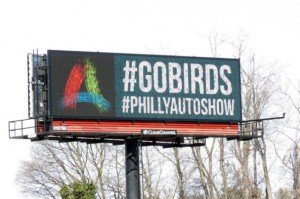 The Saturday “Green Out” set a second Saturday Auto Show record for most people with 62,857. The “Green Out” concluded with a huge E-A-G-L-E-S chant: https://www.youtube.com/watch?v=BhOsqRTuuQI

The list of brands doesn’t stop there. The Philadelphia Phillies also showed their support with a multiple Eagles banners hanging from the Phillies home stadium, Citizens Bank Park.

Another notable brand with a local presence for the Eagles parade was national brand Bud Light. Early in the Eagles season, all-pro right tackle Lane Johnson exclaimed he would buy everyone in Philadelphia a beer if they won the Super Bowl. Bud Light proceeded to take him up on the offer and offered to buy a drink for everyone instead. Months later, the Johnson and the team delivered, and Bud Light stuck to the deal by providing a free drink at various bars on Broad Street during the parade. This deal worked exceptionally well with Bud Light’s current creative campaign of Dilly Dilly, as Lane Johnson dressed up as the Bud Knight and handed out beers to the fans following the parade.  Bud Light was also able to further emphasize its campaign on a local level by revising their Dilly Dilly slogan with Philly Philly, which created an instant recognition within the Philadelphia fan base.

Bud Light was not the only beer company to take advantage of the Eagles run. Local company Yards Brewing bet New England’s Harpoon Brewing on the outcome of the big game. Luckily for Yards, the Eagles pulled off the victory and Yards reaped all the benefits.

The overall impact of the Eagles Championship is difficult to define. What we do know is that Visit Philly will experience increased exposure from the win and their supplemental marketing around the win. The Philadelphia Auto Show was able to take advantage of the moment and maximize their attendees list. Philadelphia restaurants, bars, and merchandise companies all also directly benefited from this championship. The message is clear: Local brands can increase brand impact by aligning with a champion.