The music business has undergone many fundamental changes in recent years. While more people are consuming music than ever before, they now have more channels from which to choose. So what does the future of music listening look like?

Let’s start with the present. According to Nielsen’s 2014 U.S. Music report, Americans spend more than 25 hours per week listening to music. Nearly 25% of all music consumption happens in the car followed by listening at work and around the house. While these percentages are unlikely to change, delivery of music is up for grabs.

With all that streaming going on, what is radio’s role in the music landscape? With 298 Million listeners in the US, radio still towers above the combined audience  of Pandora (79 million), Sirius (27 million) and Spotify (14 million). As listening habits have changed, radio’s market penetration has not. So radio is likely to remain the most common choice for people who lip sync and air guitar through their commute and workday.

Radio remains king of the road. More than half of all Americans listen to AM/FM radio EVERY time they get in the car. Just 13% say they spend most of their time with digital music (through a phone or mp3 player). More people than that still listen to CDs while driving (15%). And the numbers for Satellite Radio (11%) and online streaming (6%) are a distant fourth and fifth (Wall Street Journal - 9/4/2014).

Radio’s dominance in the car has much to do with its universal presence (100% of cars) and cost (free). The age of the average car is over 11 years and that means most cars on the road do not have the sort of seamless digital integration that makes online listening viable. The average car pre-dates the existence of the iPhone and even the “aux input” was a rare feature. As more and more streaming platforms gain popularity how will the in-car experience become seamless and more user friendly? Honda has gone all-in with Pandora integration in their new vehicles, but can anyone predict in two or three years if Pandora will be the service of choice for consumers who may migrate to Spotify, Beats, Amazon, or the “next big thing”? Will commuters be able to switch easily between these streaming services the way they have been conditioned to switch channels on the radio? Another major unknown will be the amount of money that carriers will be charging for data usage. A price point that is low today, but is likely to increase rapidly in coming years as data providers cash in on our digital addiction. Next generation smart, connected cars offer the promise of delivering easy content, but today’s "dumb cars" that rely on Bluetooth and aux jacks are likely to rule the road for another dozen years at least.

Meanwhile the challenge for music streaming services isn’t just the prevalence of competitors, but how to become profitable. According to Andrew Sheehy from Generator Research, “Our analysis is that no current music subscription service, including marquee brands like Pandora, Spotify, and Rhapsody, can ever be profitable, even if they execute perfectly.”

When it comes to discovering new music, radio remains the most common way for people to keep up. Radio is the source used the most often (35%) to discover new music, just ahead of family and friends (21%), Youtube (10%), and Pandora (9%). (Triton Infinite Dial 2014). 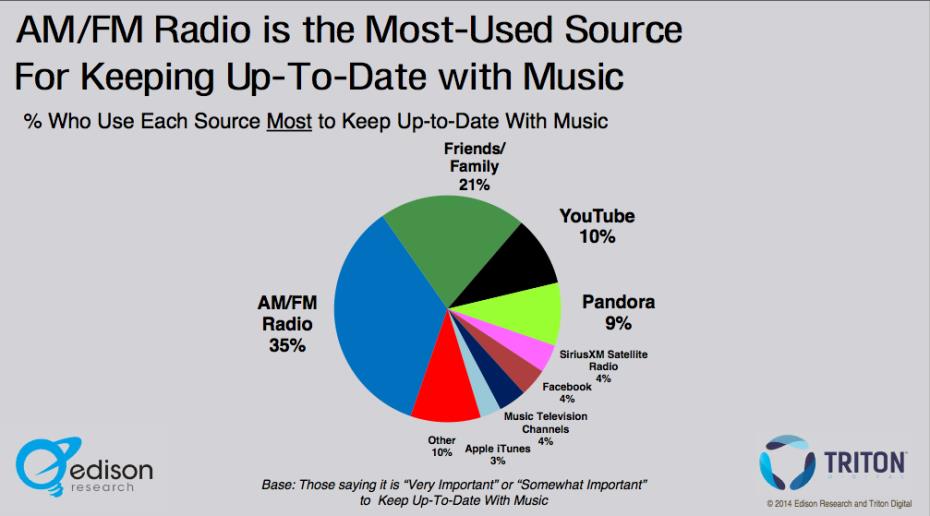 While music consumption has changed, America’s appetite for music remains as strong as ever. In the coming years, streaming will continue to grow while the number of streaming options will surge. Connected cars offer the promise of breaking AM/FM radio’s dominant hold on in-car listening, but the nation’s aging vehicle fleet and the precarious nature of the streaming business model means that radio will continue as the dominant choice for consumption and discovery of new music. Satellite radio has failed to grow beyond the 11% market share they have held for the past decade. Youtube, Facebook, and Television remain strong new music discovery choices for teens, but for working adults will continue to follow a more traditional model. At least until we are all riding along in self-driving Googlemobiles and iCars.