It's hard to keep up with the rapid changes in digital, but luckily we can rely on comScore to share data and insights which help us know where to focus. They recently released a list of the Top Ten Burning Issues in Digital, including big data, e-Commerce, and privacy. We took a deeper dive into 3 of the most important and practical changes in digital today:

1) Shift of Ad Spending to Digital 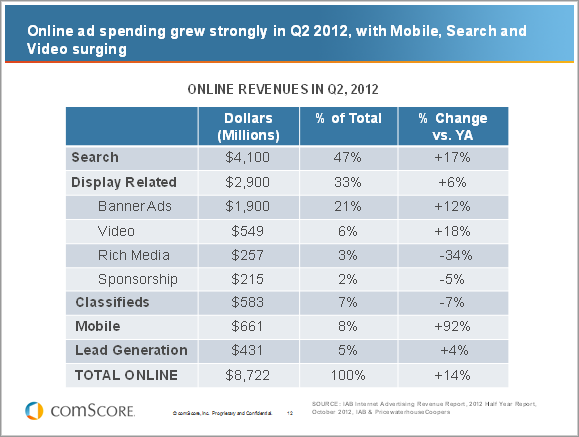 Growth among most online formats including mobile, video, and search has been strong. Perhaps surprisingly, rich media advertising didn't fare as well, which posted a decline of 34% in revenue. comScore shares a hypothesis that the high production cost of rich media ads is causing a shift to other formats, especially video where a 30-second TV spot can by easily converted into a 15-second online ad for a minimal cost. Cost can become an issue when placing these ads as more precise targeting online leads to higher consumer engagement, driving up video ad prices.

2) Growth of Smartphones and Tablets

More than 120 million people in the U.S. currently own smartphones, and over 48 million own a tablet- a 300% increase from last year. This is leading to many significant changes, the largest of which may be the way people are accessing the internet. Mobile devices now account for 13% of all internet page views, with social media accounting for nearly 1/3 of smartphone internet minutes. comScore reviewed the pros and cons of this trend:

Mobile and portable technologies are radically altering the manner in which consumers make buying decisions and how they complete transactions. This presents opportunities but also challenges. On the opportunity side, marketers can “push” information to consumers with relevant geographically-targeted messages (e.g. delivering a brand promotion when a consumer is in a local store). Or they can deliver ads when the consumer accesses a mobile web site, although this does require building mobile-enabled web sites, something that many marketers have yet to do. Apps represent yet another way of reaching the consumer with mobile advertising or promotion messages, and here comScore data show that pure play online retailers are far ahead of their multi-channel competitors in the degree to which consumers are using the retailer’s specific app as they shop and buy.

Overall, comScore reports that m-Commerce is growing at a rate of about 30% per year. This past holiday season, 13% of transactions were completed on mobile devices, with the vast majority of those completed on tablets. This is expected to increase even more as tablet penetration in the market continues to increase.

With the number and usage of mobile devices increasing, multi-platform campaigns are more important than ever. comScore conducted a study with NBC during last summer's London Olympics to analyze how viewers were consuming Olympic video across multiple channels, and the results were intriguing. A key finding was that consumption increases across all screens as more screens are used; multiple screens were not found to cannibalize the use of other screens, as demonstrated below: 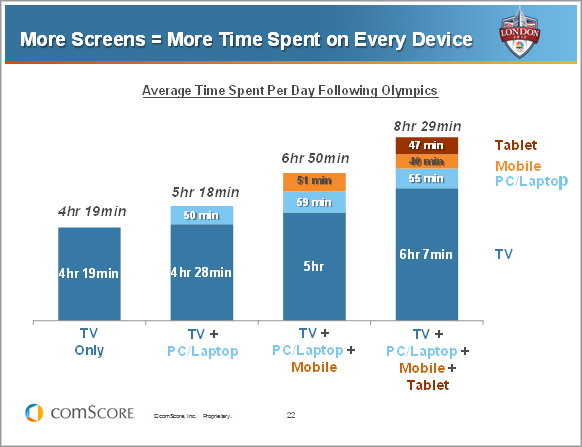 The same study also found that 25% of time spent watching the Olympics on traditional TV was accompanied by the use of another screen, and there was no evidence that these viewers skewed young as 55 of them were 55 years or older. For marketers, it is more important than ever to have a presence across multiple screens to reach consumers on the many touchpoints they are using on a regular basis.