Last week, Edison Research and Triton Digital released their annual report called “The Infinite Dial” which measures year-over-year trends in media usage habits, particularly in the audio space. The report gives an interesting and informative view on the current audio landscape and how consumers are consuming audio content in 2018. Its findings reinforce the notion that the audio space continues to grow very complex. Let’s take a look at the latest data. 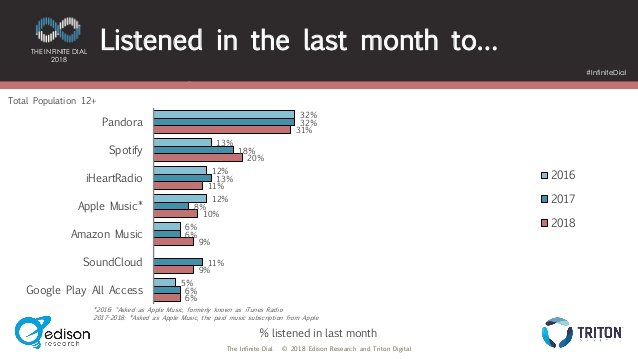 The term “audio” no longer applies to traditional radio only. Especially given the fact that consumers use different platforms throughout their day, whether they are at home or traveling. As streaming audio, podcasting, and smart speakers continue to grow, advertisers need to take a holistic view of the landscape and evaluate which options will best reach their target audience based on usage and demographics. The new report reaffirms our belief that all platforms need to be considered when developing an audio campaign, a belief we will continue to stress to our clients to ensure they are successfully reaching their consumers on all audio platforms.