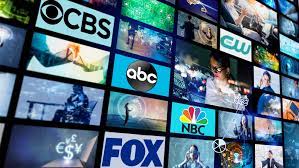 The 2022 television upfronts are back, in-person, and are about more than just broadcast television. So what are you excited to watch (or stream) this fall?

The television upfront presentations, the annual event where media companies debut their new programming offerings to advertisers, were finally held in-person last week in New York City for the first time in three years. Due to the pandemic, the annual festivities had to shift to virtual presentations for the past two years. This year an expanded list of companies presented during upfront week including NBCUniversal, Fox Corp, Telemundo, Televisa Univision, Disney, YouTube, Warner Bros. Discovery, Paramount and the CW. The list has grown in the past two years from the four traditional broadcast networks to additional media players like YouTube and Warner Bros. Discovery. Due to consolidation and the explosion of streaming services, the majority of these companies now have a larger set of offerings under their umbrellas which include broadcast networks, cable networks and streaming services. In an effort to streamline the presentations and keep them under 3 hours, the majority of the networks now present all of their programming highlights within genre based segments like news, sports and entertainment. Given the current media landscape the question isn’t where you are watching but what are you watching?

The overall theme of the presentations was that these companies can provide premium, ad-supported content that transcends each platform to advertisers. The presentations were kicked off by high-level executive heavy hitters. Disney utilized their CEO Bob Chapek to kick off their show while Warner Discovery CEO David Zaslav made his inaugural pitch to advertisers since the finalization of the merger between the two companies. Contrary to what has been traditionally done, Paramount was the only network who highlighted their fall 2022 night-by-night television schedule. FOX has still not debuted their line-up as they were held up by last minute negotiations with some of their top shows like the 9-1-1 franchise, and was the only network to maintain the virtual presentation format. FOX invited approximately 800 attendees to the in-person presentation, but those in attendance were shown a pre-recorded presentation highlighted by Fox Entertainment CEO Charlie Collier bumping into stars as he toured the Fox Studios lot in Los Angeles. Another first for FOX was the amount of time they spent highlighting their sports and news offerings. Fox News chief executive Suzanne Scott declared “We are America’s news and much more” in reference to their audio, streaming and live news offerings.

A-list talent was paraded on stage across all of the media companies’ presentations to detail reasons to advertisers on why they should watch - and more importantly advertise in their shows. Pete Davidson & Edie Falco came out to discuss their new show “Bupkis” on Peacock, Sylvester Stallone was on stage to promote “Tulsa King” his upcoming Paramount+ series, and Steve Martin, Martin Short and Selena Gomez announced the second season of “Only Murders in the Building” on HULU. ABC’s “Abbott Elementary” and CBS’ “Ghosts” brought out their shows’ stars as the characters they play on TV and not as themselves. NBC presented re-booted old favorites like “Night Court” with John Larroquette and “Quantum Leap”. With the explosion of streaming offerings many of the new network television shows were not highlighted at the presentations…instead attendees were advised to go online to watch trailers like “Alaska” on ABC starring Hilary Swank and “The Real Love Boat” on CBS.  Performances by musical artists like Kelly Clarkson, Miley Cyrus, Jennifer Hudson, Lizzo and Jon Batiste were a big part of the “show” at the presentations.

Sports played a major role in the presentations as live sports are currently the crown jewel of many of the companies’ portfolios delivering stronger ratings than most prime shows and bringing in significant spending from advertisers. All networks detailed the array of sports that they carry across their properties. NFL great Tom Brady was introduced at the FOX upfront as he will be joining the broadcast booth once he retires, while Disney brought out Dwayne Johnson and Danny Garcia to reveal their deal to air the revived XFL. Disney also leaned heavily on the Manning brothers, Peyton and Eli, who’s “Monday Night Football” “Megacast” has been a big hit. Warner Bros. Discovery relied on Shaquille O’Neal and Wayne Gretzky to tout their slew of sports such as The NBA on TNT.

Each company pushed their myriad of platforms and programs in addition to asserting the strength of their audiences and how they have the best tech capabilities and measurement tools to reach them. The newly formed Warner Bros. Discovery declared their combination of around 40 networks is now the fifth broadcast network and new CNN CEO Chris Licht vowed to be a “disruptor to the broadcast shows in this space." Warner Bros. Discovery did not get into the details of their future plans for HBO Max and Discovery+ but showcased many programs and stars that will be featured on the two streaming platforms. All presentations highlighted each company’s streaming offerings which include top talent, premium programming across movies and shows, along with their advertising friendly solutions.

At the end of the week attendees were treated to tighter, condensed presentations that displayed star studded talent who were performing (singing and dancing). The goal was to win the hearts of viewers and more importantly the dollars from advertisers. As video consumption continues to evolve and subscription growth slows down, the future landscape is a bit uncertain. What is certain is audiences crave great shows and are still willing to seek them out regardless of channel or platform. This fact is not likely to change, however how much the consumer is willing to continue to pay is the million dollar question. The future might be a consolidated scene of ad-supported players with lower fees. We might have seen this “show” before…