Affluent individuals are a key target for many advertisers, and this group (like all others) has unique variations in the ways they consume media. They tend to be early adopters of technology, use a wider-than-average variety of media platforms, and Ipsos reveals that this segment is very connected to their televisions.

The affluent weekend may include media-centric activities such as listening to the radio, going online, watching television, reading, and playing video games. What may be surprising is the margin by which television leads these activities, especially in the evening hours of 6pm to 10pm. 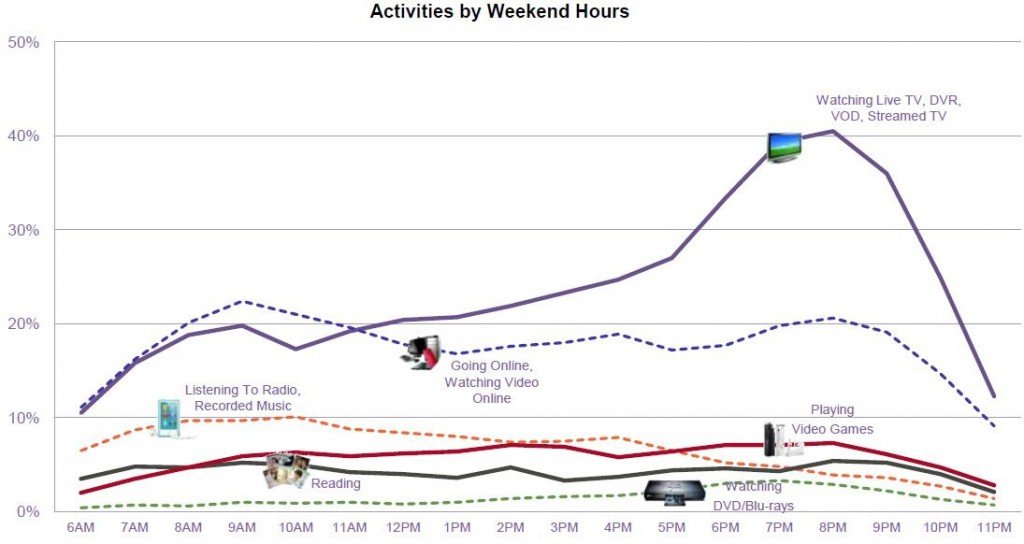 81% of affluents reported typically watching TV on the weekend, and this same percentage typically watches television on weekday evenings. Other weekend activities with over 50% of affluents typically participating include checking email (76%), household chores (59%), Making dinner (58%), and using a smartphone (52%).

Ipsos also found that major television events were closely followed by affluent viewers. Events such as the NCAA Men's Basketball Tournament (93%) and the opening ceremonies of the Winter Olympics (71%) were followed in some way by affluent audiences. This could include watching live, watching highlights, or following along on social media. These viewers were highly engaged with social media during these television events, further emphasizing the use of cross-platform strategies for this demographic. Half of affluents saw content about the Men's NCAA Basketball Tournament on social media, and nearly 1/4 posted content online about the games.

While a cross-platform media tactics are especially key when targeting the affluent segment, Ipsos reminds us to keep television top of mind when developing a mix.