Android or iPhone? This is the question many advertisers are pondering. Apple, Samsung and Nokia are activating hundreds millions of smartphones each week. Google says it sells 350,000 Android devices each day, Apple sold 35.1 million iPhones in Q1 2012. With the mobile advertising industry close to reaching $3.2 billion by 2015, both companies are aiming for total domination. Although iOS has a higher eCPM of $1.7 vs. Android’s eCPM of $1.3, users prefer Apple devices twice as much. iOS CTR averages 2.3% while Android averages 1.1%. 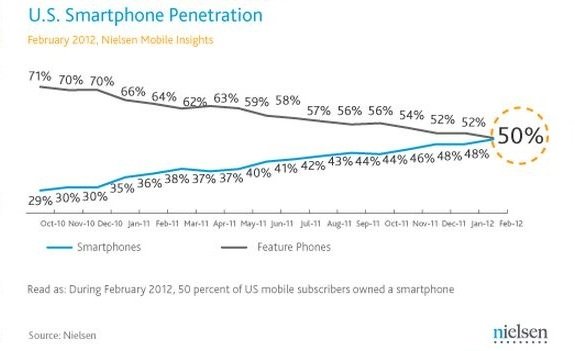 Smartphone users total 900 million, while non-smartphone users amount to 5.5 billion users. As astonishing as the differential is, the gap will surely shift soon. The smartphone market keeps growing on a national and international basis, but it still has not reached its full potential. Actually, we are still about three years away from it. 2011 marked the first time that smartphones outsold PC’s. Next, it will be tablets outselling personal computers by 2014.

Most developers and users still seem to prefer iOS over Android. iOS developers are finding more ways to monetize, and users can usually expect higher quality and fewer bugs and crashes with iOS. Applications for iOS cost $1.47 on average while Android apps average $3.25. When it comes to monetization, iOS applications bring in almost 300% more revenue than the competition. Over 75% of top 100 iOS downloads are valued at $0.99, while only 20% of the top 100 downloads in the Android Market are valued at that price. Therefore, users are less hesitant about making smaller purchases more frequently.

With the mobile wave growing and growing, ecommerce is set to increase by 39% in 2013. Therefore, advertisers need to find new ways to leverage interaction with mobile consumers based on consumer behavior. The mobile advertising platform is about to peak, and any major brand that takes too long will get left behind. Most importantly, advertisers need to find the best way to target users based on the mobile device being used.