With the ever-increasing digitalization of advertising, new methods and platforms are constantly being discovered and implemented. Mediums that were previously untouched by advertising are now hotbeds of potential. For instance, when thinking of radio/audio advertising, terrestrial, satellite, and online streaming services usually come to mind. But another form of audio with an increasing number of listeners is podcasts, and advertisers are finding new ways to reach this market.

In fact, almost half of people in the US aged 12 and over have listened to a podcast before, according to a new study from Edison Research and Triton Digital entitled “The Podcast Consumer 2017.” 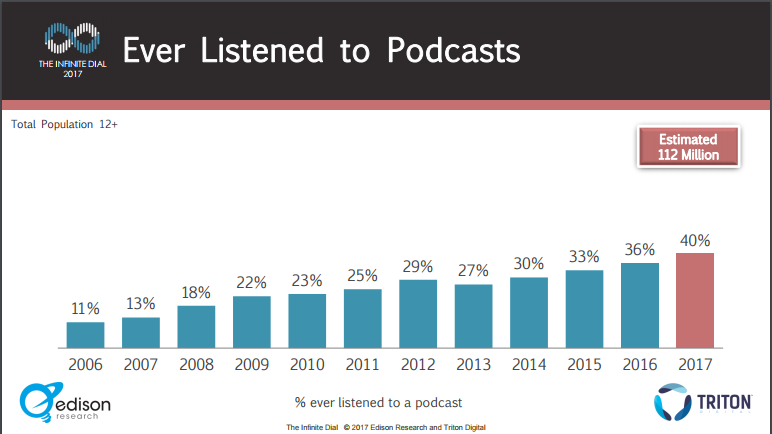 Furthermore, 60% of the 12+ population have heard of podcasting (as opposed to 55% just last year), 40% have listened to a podcast in the last month, and 15% in the past week. Most people spend a lot of time with podcasts too, 42% of the respondents listening to all of it and 44% listening to most of it. This is good news for advertisers as they can be reassured that their ad will be listened to no matter where in the commercial break the spot is placed.

While the audience of podcasts span across all age groups, 18-34 year-olds are by far the largest share of podcast consumers, making up 44% of all users 12+. 35-54 year-olds come in next with 33%. Moreover, podcast listeners are slightly more likely to be male than female, 56% and 44% respectively. They also tend to be wealthier and more educated than the average population.

While the development of podcast advertising still has a long way to go, marketers have already defined a surefire way to make an effective ad. For most spots, the ads are host-read and for mid-sized companies selling online such as Audible and Squarespace. The two factors that tend to see the best results are content marketing and a clear call to action. In other words, the key to podcast advertising is to make ads that don’t feel like ads. An advertisement holds so much more authenticity if it is read by someone’s favorite talk show host as opposed to an announcer in a pre-packaged radio spot. Additionally, including a link or a purchase code is the norm for today’s podcast advertisers. This provides a handy way for listeners to interact with a brand, and it allows companies to easily track effectiveness and ROI of a campaign.

The one drawback to a host-read advertisement is that the host may say something that the advertiser doesn’t want them to. Even so, the ad may still be more successful than if it was done in a traditional format. For example, Bill Burr’s Valentine’s Day endorsement of Sharri’s Berries could have gone one of two ways if it didn’t contain both of the important elements. The copy reads, “show her you thought of something unique and different this year, and get her the gift she is sure to love: Sharri’s Berries.” But what Burr says after this is, “yeah, get her something unique. Get her something you and f**king four million other people are going to get.”

Although this is something that the advertiser certainly did not plan for, it still surprisingly drove sales. Sharri’s Berries’ acquisition marketing director, Nick Fairbairn, explains it well. “I mean, does that fall within our brand standards? Probably not. Is it authentic to Bill Burr the comedian in a podcast space that’s not nationally regulated for language? Yeah, it’s right on brand for him. And gosh it was ROI positive, too.”

One of the biggest reasons why this ad was successful was the line that Burr read at least three times in the course of the ad, “go to berries.com, click on the microphone and type Burr.” Without this clear call to action, the ad could have easily fallen flat, or worse, tarnished the brand’s reputation as unoriginal.

So, if this formula proves that it can sell berries, why can’t it work for large-scale brands like Coca-Cola? This is the question that many advertisers are asking when it comes to podcasts. Being long-form audio content, podcasts don’t leave a lot of room for advertising; some don’t even have any advertising at all. Instead, maybe advertisers should stick to smaller scale companies who are willing to pay the premium for host-read advertisements. Perhaps increasing quantity of podcast ads is not the answer, but to improve the already valuable quality.