Within the past year, Pinterest has rolled out an array of back-end updates that are empowering to creative businesses as well as pinners.

Most recently on November 20th, Pinterest has announced a piece of Holiday news. The company is launching a Secret Santa tool which helps to connect friends and family members together. This new spritely tool is able to analyze the person’s existing boards, and triggers the Pinterest API to curate a board of gift ideas for each person.  There is even an option use interest points to create this kind of gift collage for users who do not have their own Pinterest account. In addition to the auto-populated recommendations, Pinterest has encouraged advertisers to take part in the recommendations by offering their own custom recommendations. Major advertisers taking part in the custom gift recommendations include Amazon.com along with Bed Bath & Beyond. Coca-Cola will be taking part through another angle as they are creating personalized messages for gifters.

On a broader level of improvement, in September, Pinterest officially opened up its Taste Graph for businesses of all sizes to use. The “Taste Graph” is a kind of auto-targeting map that weaves together interests of each individual, allowing for a map to more accurately draw predictions of which pins would allure each person. In addition to improving the accuracy of the Taste Graph, Pinterest’s auto-targeting upgrade allows for 5,000 more categories to be targeted. Brands are not required to utilize auto-targeting with their advertising, though this type of artificial intelligence offers brands a unique edge to consumer seeking, especially since according to a study on Pinterest’s business website,  “Over 2 billion searches happen on Pinterest every month. And 97% of those searches are unbranded, which is why Pinterest is such an effective place to reach people while they’re still considering their next buying decision.”

For advertisers looking for more deliberate hands-on options, you’ll be happy to find out that Pinterest has  been perfecting  its self-serve search engine marketing tools. In the past year, Pinterest has strategically mirrored aspects of Google Adwords and  Facebook marketing to allow for a more effective journey between user queries and pinned products. For example, similar to Google Adwords, Pinterest  advertisers large and small are now able to utilize exact matches, broad matches and phrase matches in their search marketing plans. Advertisers can even implement negative keywords to guarantee their ads aren’t associated with certain terms. For example, if a business is selling jewelry from the country Greece, they might want to target the key phrase “Greek Jewelry”, while avoiding key phrase searches including “Greek Life” or “Sorority.”

Another avenue Pinterest continuously built upon over the years is philanthropy through collaborative projects. JOANN’s Fabrics is an example of a company who realized that Pinterest’s DIY audience dovetails with its own generous, crafty foundation. Stemming from this realization, JOANN decided to launch a virtual “Make And Give” event. This event is promoted through Joann Fabric’s business account and encourages people to make ornaments for friends and family using JOANN donated fabrics, which are tied into Pinterest’s trending boards. In response to this synergized act of giving, Joann Fabrics has agreed to donate 1 dollar to St. Jude’s Hospital for each ornament made by a generous crafter, and will donate up to $50,000. The next “Make and Give” event is scheduled to occur on November 28.
For those who are curious about Pinterest’s true value as an aesthetic goldmine, and its lasting power for years to come,  eMarketer has reported that the amount of Pinterest users has risen steadily in the past few years, and is expected to continue rising each year. (included in chart below) 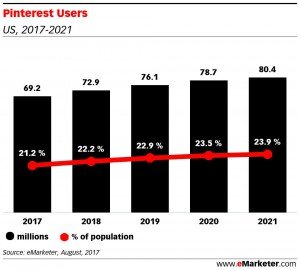