Are people still using Facebook? How many social accounts to most people have? Who is using Instagram? These questions and many more are answered in the latest installment of Pew Internet's annual Social Media Update, released this week. This year's study focuses on five top social media platforms (Facebook, Twitter, Pinterest, Instagram, and LinkedIn) reviewing who is using each and how they are being used.

Facebook unsurprisingly remains the most popular social network by a significant margin, though its growth is slowing as many are signing up for smaller networks like Pinterest and Instagram. Perhaps most importantly for Facebook, the study found that their large user base continues to be very active. 70% engage with the site daily (with 45% doing so several times a day) which is a significant increase from the 63% who did so in 2013. Pinterest and Instagram retained their levels of engagement in 2014, with 17% and 49% respectively engaging daily. Twitter did not fare so well, decreasing from 46% of users engaging daily in 2013 to 36% last year.

The study also revealed that 52% of of online adults use multiple social media sites. For these users, Facebook acts as their "home base" as it remains the most popular website for those only using one social network and it also has significant overlap with other platforms. 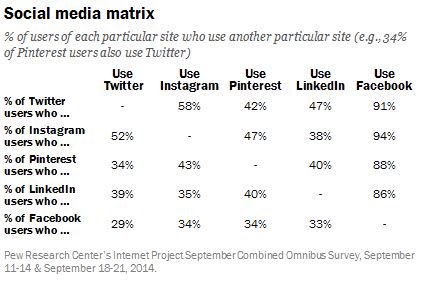 Finally, the report reviews the most updated demographic profiles for each social network, finding that:

- 71% of online adults use Facebook, a percentage which did not change from 2013 but now contains a higher proportion of seniors

- 23% of adult internet users currently use Twitter, with young adults aged 18-29 driving the user base

- 28% of online adults are LinkedIn, remaining popular among college graduates, those in higher-income households, and the employed

For more from the informative study, visit pewinternet.org.