Amazon and Google promote the evolvement of audio speakers from being able to play music to becoming personal, digital assistants. This past holiday season, Amazon reported record sales on their website. Their smart speakers, known as the Amazon Echo line, topped their list with a reported 9x increase in sales compared to the 2015 holiday season. With similar features and capabilities, the Google Home is another smart speaker device that has increased in popularity since its release in November 2016. Smart speakers have wireless and Bluetooth capabilities with voice-enabled functions that allow consumers hands-free convenience in the household. They respond to a wide variety of commands and questions related to things such as calendar scheduling, thermostat and light control, common facts, music, shopping, entertainment and cooking to name a few. To activate the smart speakers, users can simply say the smart device’s name followed by their question or command.  Amazon Echo has named their device “Alexa”, and the Google Home activates with the phrase, “Ok Google.” While the idea of a smart speaker is not brand new, these devices have certainly gained traction in recent months. According to eMarketer, usage and penetration of smart speakers should grow significantly within the next four years. Although the Amazon Echo dominates usage, eMarketer predicts the Google Home will remain competitive with the Echo line and continue to increase share within the next four years. 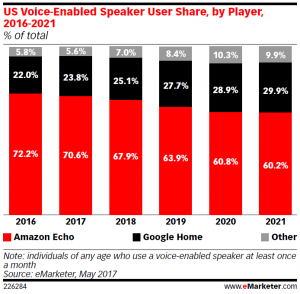 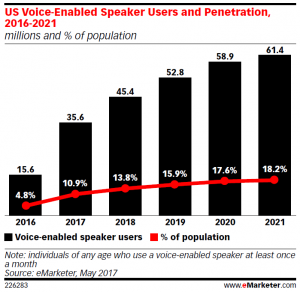 Advertisers and brands are constantly searching for new ways to reach consumers in an effective and efficient manner. As technology evolves, the opportunity to advance digital targeting grows. Smart speaker devices have the ability get to know their consumers on a very personal level, leaving advertisers wondering when the speakers will begin to allow ads. This would give brands the chance to develop a new type of relationship their consumers, just based on listening to them directly. While Amazon and Google have not officially implemented advertising in their devices, they have experimented with the idea. VoiceLabs, a startup working with third-party developers, recently launched a new interactive ad network created for Alexa Skills. Alexa Skills are voice-driven capabilities set-up within the Alexa app. Some popular apps available through Alexa Skills include Uber, FitBit, Campbell’s Kitchen and Spotify. Just as VoiceLabs released the new ad network in May, Amazon cracked down on their advertising policies by adding tight restrictions on sponsored messaging. The new restrictions ban any advertising for third party products or services. In reaction to the policy change, VoiceLabs placed their efforts on hold, understanding the market may not be ready. Whether the market is ready or not, it is likely Google feels pressure to incorporate advertising into the Google Home’s features. According to Business Insider, advertising comprised roughly 87% of the company’s revenue in Q1. This past March, Google served audio content in the Google Home voice announcing the release of Beauty and the Beast in theaters. They served the announcement with a summary of the day ahead, which typically never includes any type of sponsored content. Although Google denied the content as a promotion, the home users did not sound happy. Google responded to the complaints saying,

“This wasn’t intended to be an ad. What’s circulating online was a part of our My Day feature, where after providing helpful information about your day, we sometimes call out timely content. We’re continuing to experiment with new ways to surface unique content for users and we could have done better in this case.”

While the opportunity to advertise with smart speakers could be a great media outlet for brands, it may be a little too invasive for the average consumer. As Amazon, Google and other smart speaker players compete to win consumers’ favor, they must prioritize user experience. For now, this may mean no advertising on the platform. However, it is definitely something advertisers and brands should be aware of as a potential option for the future.