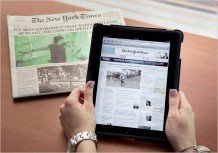 Beginning today the New York Times has introduced a digital “wall” that will requires its heaviest digital users to pay for online access.

In its new plan, those who access 20 or more articles a month will need a subscription costing $15 for 4 weeks ($195 per year). That cost will cover web and smart phone app access. There will be additional costs for an iPad app as well. Those with current print subscriptions will not have to pay for online access. In the words of the New York Times, here’s how the program works

• On NYTimes.com, you can view 20 articles each month at no charge (including slide shows, videos and other features). After 20 articles, we will ask you to become a digital subscriber, with full access to our site.

• On our smartphone and tablet apps, the Top News section will remain free of charge. For access to all other sections within the apps, we will ask you to become a digital subscriber.

• The Times is offering three digital subscription packages that allow you to choose from a variety of devices (computer, smartphone, tablet).

• Again, all New York Times home delivery subscribers will receive free access to NYTimes.com and to all content on our apps.

• Readers who come to Times articles through links from search, blogs and social media like Facebook and Twitter will be able to read those articles, even if they have reached their monthly reading limit. For some search engines, users will have a daily limit of free links to Times articles.

The newspaper industry is viewing this move with great interest because it comes at a time when the newspaper industry continues to lose revenue, despite the relative health of other media segments. According to the Newspaper Association of America, advertising revenue for American newspapers in 2010 (digital and print) declined 6.3% to $25.8 billion, while overall ad spending increased more than 6% in 2010.

According to comScore, 30 Million readers access the New York Times digitally, and of those about 15% are considered the heaviest users, which they define as 20 or more articles per month.

The New York Times has a legitimate reason to want to consider a pay wall given its volume of digital access. They may succeed in developing a significant revenue stream. Clearly they also already recognize the forthcoming demise of the printed version. Arthur Sulzberger Jr., New York Times Publisher, said in a conference last year the words that sent shivers down the industry’s spine,

"We Will Stop Printing the New York Times Sometime In the Future, date TBD"

We believe that the New York Times is a unique publication with both national and local power and, as a thought leader, may switch (some) readers to a digital pay plan. They also may try to charge higher CPMs for the readers behind the pay wall, who clearly value the product. But it would be foolish to extrapolate whatever success the New York Times may have to other lesser newspapers.

Time will tell whether this can work for the New York Times. We believe they may have some success, but the serious business issues facing the newspaper industry will not fade even in the face of a small success for the Times.

We welcome points of view from our friends in the media and marketing community.