The holy grail for TV advertisers has always been to deliver specific messages tailored to their target audiences. Addressable TV aims to do just that for the television industry.

Online advertising is paramount in regard to its ability to target and track advertising campaigns, but what if these capabilities could translate to offline channels? Household addressability refers to a marketer’s ability to target ads to specific households based on audience segmentation and demographics. In doing so, this method provides the targeting and tracking capabilities of an online campaign with the large reach offered through television.

So how are these ads executed? Cablevision, one company which currently provides this advanced targeting, offers technology allowing advertisers to show different commercials through different set-top boxes while they are tuned to the same channel- all in real time. Targeting is possible through a third party who anonymously matches the names and addresses of cable subscribers to data provided by advertisers and other vendors. Several retailers are already taking advantage of this opportunity, such as the Home Depot which launched a campaign on the Weather Channel featuring custom gardening and lawn care tips segmented by region. 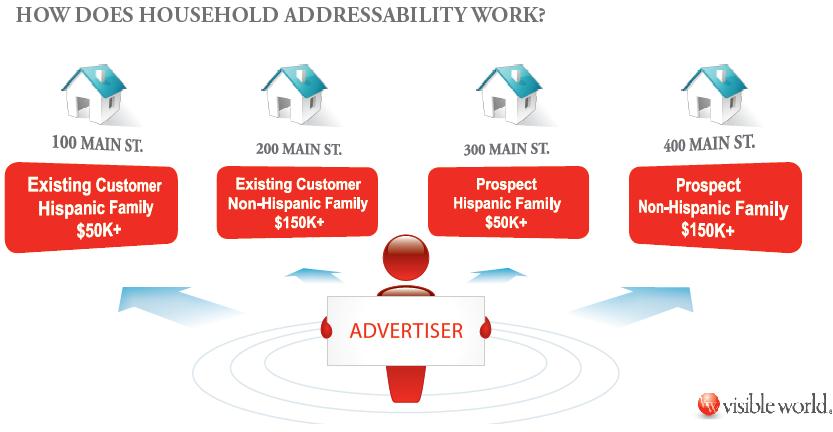 While TV addressability may sound like a perfect innovation, it is not without its complications. Clickz points out 3 major barriers to the widespread adoption of addressable TV:

1) Technology- The existing television hardware wasn’t designed to handle this type of advertising.

2) Privacy- Many consumers are hesitant about being tracked and targeted.

3) The Nature of TV- Television often reaches several viewers at once, allowing for less 1-to-1 targeting which is found through other channels such as web and mobile.

None of these challenges are unsolvable, and the push to achieve this technology will continue due to television’s competition with other media. The TV industry can’t afford to lose more ground to online advertising companies which are able to charge a premium for their highly targeted (and highly effective) ad options. This innovation is also driven by the fact that this technology has been found to make consumers more receptive to TV advertising. One study found that households receiving addressable TV spots changed the channel during the commercial 32% less than households that receiving non-addressable advertising.

What are your thoughts on addressable TV and the future of television advertising? Let us know what you are thinking.