Over the past decade, the rise of digital video recorders and streaming services such as Netflix and Hulu has changed the way people consume TV content. As time-shifting and binge-watching have become more and more popular, people often record their favorite shows. When watching the recorded versions, they will often fast forward through the advertisements to save time. Some people even wait months after the original broadcast to catch up on an episode. This means that paid advertising slots during regular TV shows have a declining return on investment.

However, there is one type of programming that has proven immune to these trends; sports broadcasting. While some die-hard sports fans may DVR games while attending family gatherings or social commitments, most of them will agree that watching a recorded game just isn’t the same. This means that people are forced to watch the commercials during sporting events. Data published by Nielsen illustrates sports programming’s relative rise in relevance. In 2005, sports programs accounted for 14 percent of the Top 100 live TV programs in the United States. Last year, that figure rose to 93 percent. 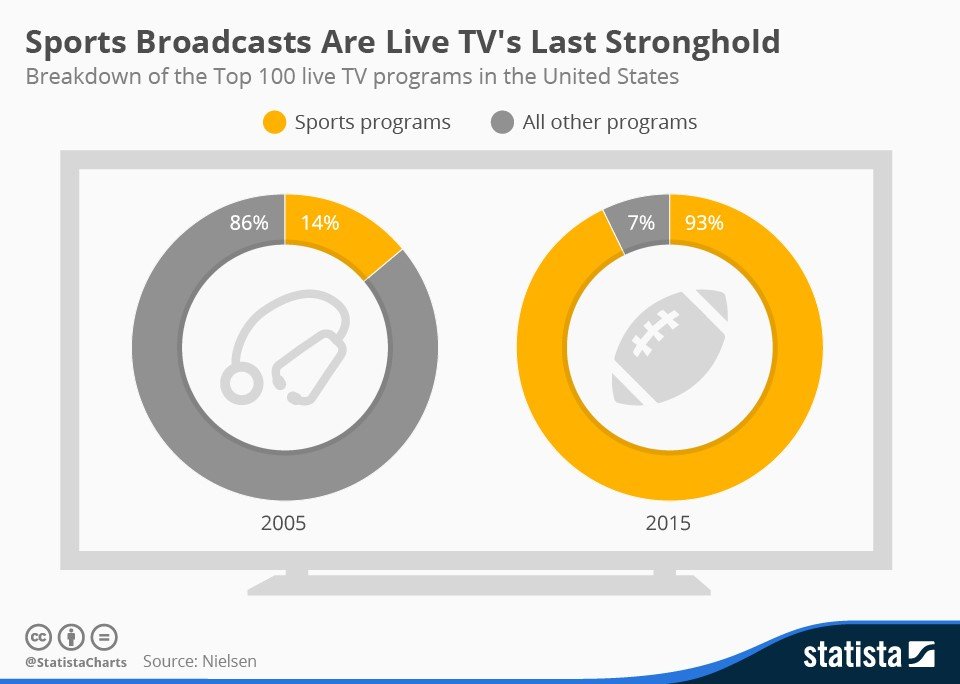 Some sporting events have huge ratings that a general TV show could only dream of reaching.

- This past Super Bowl generated the 3rd largest TV audience in history with $111.9 Million viewers

- The UEFA Champions League has an annual global TV audience of $1.7 Billion

TV networks pay large amounts to air these events, per lastwordonsports.com, which in turn increases the total cost to the advertiser to promote a product.

It remains to be seen how much longer sports fans will tolerate the rising fees for levels of their TV service. With Sling TV offering ESPN as part of its streaming TV service for $20/month, and various other streaming packages available, it’s only a matter of time before sports fans consider alternative viewing options. The NFL recently announced that it has selected Twitter as its exclusive partner to deliver a live OTT digital stream of Thursday Night Football to a global audience across devices and for free during the course of the 2016 NFL Regular Season.

While the cord is not completely cut as of yet, it is definitely shaved!