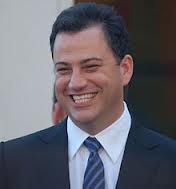 The late night landscape has changed again. The move of Jimmy Kimmel Live to 11:35pm puts Kimmel, 45, head to head with late night elders and sixty-somethings David Letterman and Jay Leno. ABC’s Nightline, born from the Iran hostage crisis in late 1979, has been airing at 11:35pm but will now air after Kimmel at 12:35am. Additionally, in a miniscule strategic move, The Tonight Show with Jay Leno actually now begins at 11:34pm, clearly allowing Leno to boast that they have captured the important 11:34-11:35pm viewer. But every I guess they figure every little bit helps.

Actually the Kimmel move by ABC is a smart one, even if Jimmy Kimmel Live doesn’t exceed Nightline’s prior ratings. In fact it’s not likely do so, but since the advertising value of entertainment programming exceeds that of news, this may pay financial dividends. Furthermore since Leno and Letterman are on the “back nine” of their late night lives, the move may set up Kimmel as the premier late night host for the balance of the decade, and beyond.

Kimmel has some room to go however. His late night audience has been roughly 1.9 Million viewers with the previous 12:05 start. The obvious advantage in the move is that there are 15% more viewers at 11:35pm. But that alone will be insufficient to fully close the gap, since Leno has averaged roughly 3.5 Million viewers and Letterman 3.1 Million. We suspect there will be some erosion of Leno/Letterman ratings and the ultimate gap may be small, or perhaps Kimmel may ultimately take the lead. And obviously there are other late night programs, Conan on TBS and the Daily Show with Jon Stewart and The Colbert Report which seek the younger end of the attractive advertising demo. Leno and Letterman may soon leave the late night TV landscape, which could happen in the next few years.  As the players change, if Kimmel gets off to a strong start, he may become the lead dog in late night.

Late night may not be what it used to be, but it still generates roughly $500Million of annual ad revenue. In the long-ago Johnny Carson era (1962-1992), the NBC/Tonight Show once had the lion’s share of the late night financial pie, but in today’s world The Tonight Show does not generate the profit it once had.

Once again, change is the status quo in the media world and change is straight ahead at 11:35pm.