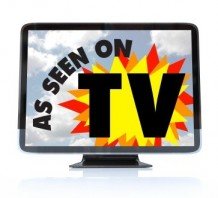 The simple answer and short–term answer is “no”. But the real answer is far more complex.

Let’s start with this critical caveat: TV was, is, and, probably in some shape or form forever will be an important medium in reaching all age groups, young and old.

However… there is a growing gap in TV watching between those under 35 and those over 35. And TV watching among the 35 and under demo is in fact declining. Recent Nielsen data suggest this is the beginning of a trend, which has significant longer term implications for this powerful medium. What’s changed is that the appointment viewing of television of yesteryear has diminished, and that the standard TV appliance is not the only way video is being consumed, particularly among a younger audience. YouTube, Hulu, social networks, smartphones, tablets and devices yet to come all vie for the attention of a younger audience which are far less apt to plop down on the couch to watch television in rapt attention. But for today’s younger audiences there are many alternatives to sedentary TV viewing and many places where video can be viewed. Truth of the matter is that the viewing habits of today’s teens have been rapidly changing (see earlier Monitor: The Changing Habits of Today’s Teens) and teens watch 11 fewer hours per week of television than the public at large. Moreover there is also a small but significant "cord cutting" and the % of TV homes has started to decline, see: Why is TV ownership declining?

Recent Nielsen data is interesting in that while overall TV viewing is stable, it is fueled by increased viewing of a 65+ audience which is obviously an important and growing audience, but one in which few media buys are based on. This increase is however counterbalanced by 3 consecutive quarters of declines among an under 35 audience. According to Nielsen data viewers 18-34 watched roughly seven fewer minutes a day in the 3rd Quarter of 2011 than the same period the previous year, and teens (12-17) watched nine fewer minutes.

Consuming video across multiple computer, handheld and tablet devices is second nature now to many, and not seen as something special or different to watching television to a younger audience. However to Nielsen, computer and mobile viewing is something different than watching a show on “television”.

Moreover,  during the past 3 years time-shifted TV has increased by 66%, and users of mobile video viewing has seen a 206% increase.  This reinforces that traditional TV watching is moving to multiple devices and that today’s younger audiences use the device and the time and place that best fits their needs and lifestyle. These are trends that will continue and will continue to erode “traditional” TV viewing such as it has been.

As always, with change come opportunities. We’ll be watching.