As ad blocking usage explodes, some companies are considering testing out the notion of potential viewers paying for a subscription. “A lot of people blame YouTube for ad-block usage,” said Zack Sinclair, CEO of FairBlocker, an ad- blocking software firm. “Display ads are easy to ignore. On YouTube, you see exactly how much time is being wasted.”  Ad- blocking consumers can also avoid commercials on news and entertainment websites and on digital TV platforms like Hulu, killing banner and pre-roll video ads alike.

Supporters of ad blocking are growing in popularity and goes to show that the internet community shares in their concerns of privacy. On the other hand, you do not have many people that understand tracking, nor do they have strong opinions about it.  The number of people globally using ad-blocking software grew by 41% during the first half of 2015 compared with the same time period in the prior year, per a study released by Adobe Systems, and PageFair.  As of June 2015, there were 198 million monthly active users for the major browser extensions that block ads.  Ad-block usage rates vary depending on content type and audience demographics. Publishers whose audience skews toward young males, such a video game sites, tend to see much higher ad-block usage compared with general new sites.

The ad blocking software works by either preventing networks from serving ads or simply hiding ads after they are served. This has a huge impact on the future of the web.  Many advertisers pay a fraction on a cent each time an ad is shown to a visitor.  Ad blockers cut off this revenue stream and make it difficult to offset even the running cost of storing and delivering content to visitors.  Ad blocking may become even more common with the release of Apple’s widely used desktop and mobile operating systems later this year. The operating systems will feature a framework that makes it significantly easier for developers to create ad-blocking software, particularly on mobile. 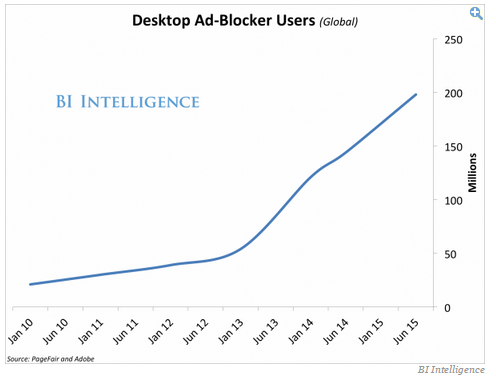 Looking into the future, advertisers will need to remember that the user wants to be engaged by mobile ads and interact with a brand on their terms. Mobile advertising strategies must follow suit by incorporating paid ads thoughtfully.