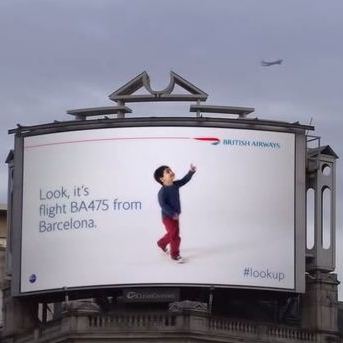 The words of technology and advertising are frequently overlapping, resulting in some astonishing campaigns. Recently, two efforts from British Airways and Macy's have made us take note of the amazing (some would say creepy) advertising opportunities stemming from new technology.

British Airways latest outdoor marketing campaign is like nothing you've seen before. Their newest digital billboards track and respond to incoming British Airways planes. When a plane is passing overhead, a child on the billboard points at the plane and follows it as it travels through the sky. The billboard also details the exact flight number and point of origin for the plane passing overhead. The Drum reports that the board may also include messaging relevant to the flight above, such as an offer on a British Airways ticket to a relevant destination via a custom URL, or noting the temperature at the airplane's destination.

Developed by Ogilvy 12th Floor, the billboards use custom-built surveillance technology to track a British Airways aircraft overhead and link back to the board. Abigail Comber, British Airways’ head of marketing, said: “This is a first... The clever technology allows this advert to engage people there. We hope it will create a real ‘wow’ and people will be reminded how amazing flying is and how accessible the world can be.” Experience the 'wow' for yourself in the video below.

Soon, your iPhone will be able to recognize when you enter a Macy's and can provide custom instructions and offers as you shop the store. This is possible thanks to Apple's new iBeacon technology, a type of Bluetooth hotspot introduced in the newest version of iOS, reports The Verge. Also partnering with Shopkick (an app we first reviewed in 2011 in 'What is Shopkick?'), Macy's is able to send a signal via Bluetooth transmitters to a shopper's Shopkick app when they enter the store. The signal alerts the app to display a message even if the phone is in sleep mode.

For the initial test, Shopkick placed several 'Beacons' in select departments of Macy's stores in New York and San Francisco. The app can provide tailored messages, such as offering 30% off an item you have already noted you like when you enter the department in which the item is being sold. While Shopkick has about 6 million users, iBeacon is a new technology and the Macy's tests are designed to determine how many notifications customers want to receive in stores. According to the WSJ, Major League Baseball is planning to use iBeacon technology at some stadiums and Apple is expected to roll it out in its retail stores. Watch the video below to see iBeacon in action.