This past week, eMarketer released their updated estimates and forecasts on U.S. media usage.  The report includes time spent with traditional media, such as broadcast and print, as well as with several different digital media such as mobile, desktop, and other connected devices.  Based on their research, eMarketer estimates that consumers will spend a daily average of 12 hours and 7 minutes consuming media in 2017, which is three minutes higher than in 2016.  It is interesting to note that over the past several years, overall media usage continually increased, especially as smartphones gained in popularity which helped facilitate with multi-tasking.  (If a consumer is using their smartphone for one hour while they are watching one hour of TV, it counts as two hours.)  However, the growth in media usage is now expected to slow, and eMarketer does not expect much change to occur over the next couple of years.  At least, not until “The Next Big Thing” comes along. 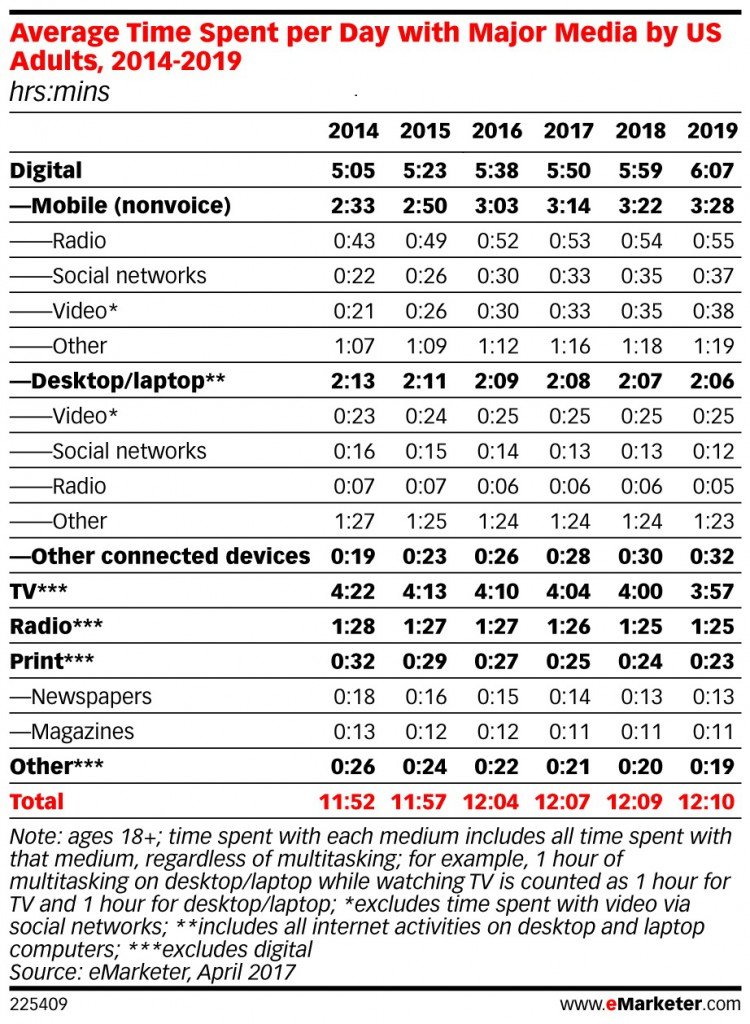 So what drove the 3-minute increase?  The largest growth is coming from mobile usage (nonvoice), which is expected to increase by 11 minutes in 2017 to 3 hours and 14 minutes.  However, the growth in mobile is offset by decreases in almost all of the other media types.  TV had the largest decrease, dropping six minutes year-over-year, however it is worth noting that TV still remains the single largest source of media time at 4 hours and 4 minutes, thanks largely in part to its high penetration among the adult population.  eMarketer states that 92.9% of the U.S. adult population are TV viewers, whereas  77.1% are smartphone users.

Some other highlights from the report include an increase against social media and digital video, which comes as no surprise.  Social media usage on mobile devices is now more than double that on desktop/laptop devices (33 minutes vs. 13 minutes, respectively), whereas digital video is seeing growth across all devices (and screen sizes).

While eMarketer’s report is useful for identifying overall trends, it is still important to have a solid understanding of your target audience’s media consumption habits.  For example, although TV accounts for a large portion of overall media time, its usage varies greatly when you compare millennials to baby boomers.  eMarketer reports that in 2017, 97.7% of baby boomers will be TV viewers, compared to only 86.7% of millennials.  This gap is expected to widen in the next couple of years.