In today’s ever growing media landscape viewers are inundated with multiple platforms to consume media. The continued expansion of Netflix, Amazon and Hulu as well as the creation of Video-On-Demand and DVR have fundamentally changed the TV backdrop. With that being said, what is the ultimate effect on purchasing traditional broadcast and cable?

Some advertisers believe that with the change in landscape consumers are no longer forced to watch advertisements and ultimately just record every show and fast forward through the commercials at a later time. However, the research and data does not support that statement.

In a study by TiVo’s Media TRAnalytics data set from Q2 of 2016 found that only 26% of broadcast prime-time programming was time-shifted, while cable prime-time viewing was only time shifted 12%. The numbers drop further when you incorporate data from the entire day, dropping to 20% for broadcast and 9% for cable. 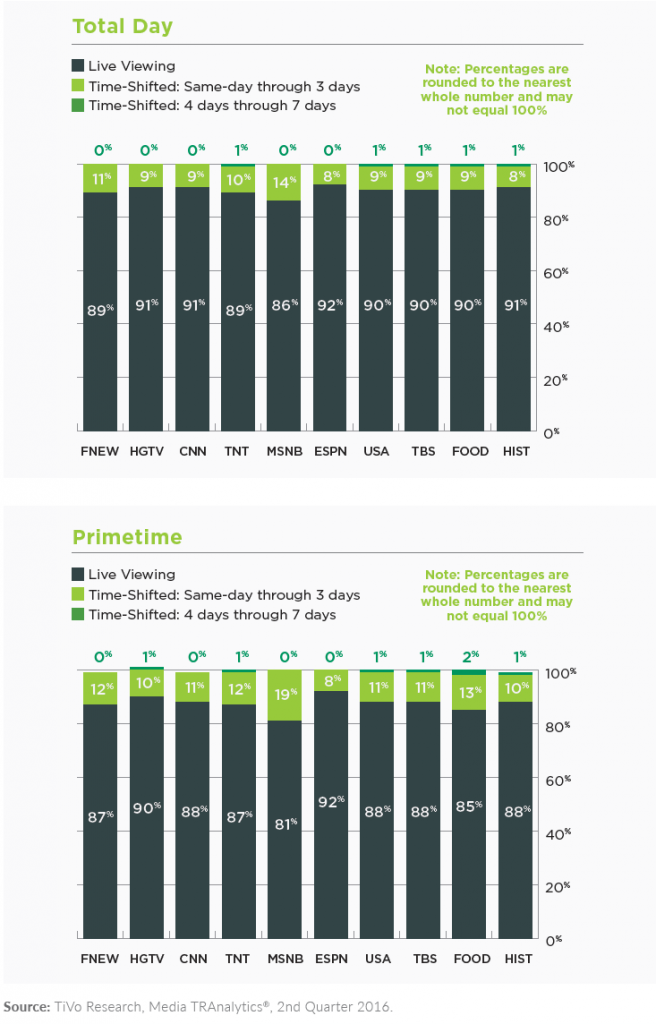 While Time-shifting TV and DVR are only a percentage of individuals not watching live TV, what about the other consumers who have shifted to streaming services over traditional cable.  As of Q1 of 2016, “it marked the first time that streaming video services were in 50% of US TV households. That was up 8% points from just a year earlier. By contrast, DVR penetration had remained flat at 49-50% for the prior 6 quarters.”

As streaming video services continue to grow, how does that impact traditional live TV? According to data by SSRS from its National Media & Technology Survey (NMTS), offers perspective outlined in the below chart. 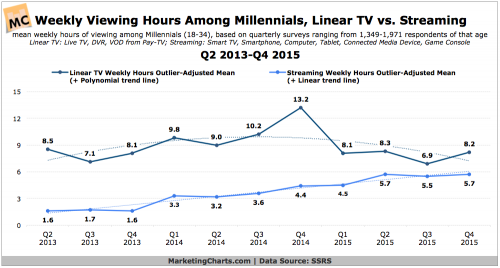 The data above shows that while traditional/linear TV has remained relatively flat, streaming hours have more then tripled. While this data proves steaming TV is increasing it also proves that digital video is complementing traditional TV more so then replacing it as total video hours continue to grow.

Please note that the data above is among millennials (18-34), who according to the Total Audience Report watch the least amount of TV amongst adult segments.

The age of the individual greatly effects how much TV they are actually watching. The below chart outlines traditional TV viewing trends, by age group.

The chart indicates how much time spent in hours against the entire population are watching traditional TV. Adults 35-49 are still watching 28 hours of TV a week, while Adults 50-64 are watching 39 hours a week.

Overall, what does all this data mean to advertisers in regards to traditional Prime TV? The current data indicates that time shifting is happening, but not nearly as much as some advertisers assume. It also means that streaming services are continuing to increase, but they are being utilized more as a compliment then as a replacement. Finally, older age groups are still watching heavy hours of traditional TV.

In conclusion, based on the above findings traditional TV should still be purchased as the strongest media platform with an emphasis in prime as that is best way to reach the most viewers. However, DVR, VOD, and streaming services should be continued to be monitored as the ever changing media landscape continues to adjust to the consumer’s demands.