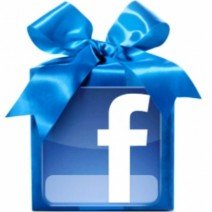 Do people really want to give and receive gifts on a social network? Facebook will likely be able to answer that question after this holiday season with their new Gifts service. Stemming from Facebook's acquisition of mobile app Karma, the social network introduced Gifts in September and expanded the service as the holiday shopping season kicks in to gear. Gifts is one of several ways Facebook is trying to increase their revenue after a poor stock debut earlier this year.

The aim of gifts is to make gift-giving for any occasion a simpler task. Reminders will pop up on Facebook at relevant times, such as on a friend's birthday, providing a gift box icon users can click to buy a gift. Purchase options currently include Hulu Plus subscriptions, clothing from Baby Gap, cupcakes from Magnolia Bakery, magazine subscriptions, and donations to charity. After selecting a gift, users are then able to select a virtual greeting card before entering their credit card information to complete the transaction. Facebook stores this information unless specifically removed by the user. While Facebook doesn't currently use data collected from the Gifts service for ad targeting, it certainly may do so in the future.

Facebook Gifts is one of the first major forays into uniting social media and e-commerce in a significant way, but is this union something that users will embrace? MediaPost notes, "the problem with this social commerce initiative isn't just that most of us don’t think of Facebook as a place to buy gifts, or that the offering is limited; it’s also that those with a huge e-commerce presence, like Amazon, barely scrape the surface of what social data could bring to them. For instance, if you join, Amazon’s Kids’ Birthday Club, you can save a Gift List and post it on Facebook or Twitter, but who really wants to share their kids’ wish lists with potentially hundreds of people? It just isn't a very refined use of social data."

Time will tell consumer's reaction to the service. So far, Facebook has not released data on the number of gifts which have been purchased, but did reveal that the average price of a Facebook Gift is $25. We'll be looking forward to more results after the holiday season.