Advertisers have long been at the mercy of Google. The 82-billion-dollar company has built its massive empire around its hugely popular search engine, which processes on average over 40,000 search queries every second or 3.5 billion searches per day.  Google’s influence in the consumer purchase funnel has made the search engine too large to ignore in advertisers’ marketing plans.  Yet, in an effort to maintain a positive user experience, Google has reworked its algorithm and redesigned its ad layout countless times forcing advertisers to adapt and not always for the better.  In February, Google eliminated right side ads from the desktop search engine results page (SERP) for more consistency across mobile, desktop, and tablet viewing, but creating less real estate for advertisers and a more aggressive market for ad positioning.

However, on Tuesday, Google announced the launch of three ad innovations for a mobile-first world: expanded text ads, responsive ads for display, and device bid adjustments.  First introduced at the annual Google Performance Summit in May, the official rollout began July 26th. Sridhar Ramaswamy, Senior Vice President of Ads & Commerce, wrote, “To help marketers succeed in this mobile-first word, we have redesigned AdWords – from the ground up – and re-thought everything from creative and bidding, to workflow and measurement”.

The new expanded text ads (ETAs) will provide advertisers nearly 50% more text to promote their brand.  ETAs will feature two headlines, each with 30 characters, and one long 80-character description line.  For those unfamiliar, existing text ads had been restricted to a single headline of 25 characters and two description lines of 35 characters a piece.  The change can benefit advertisers greatly as users can now learn even more before clicking on the ads.  The images below shows the difference between the old and the new features. 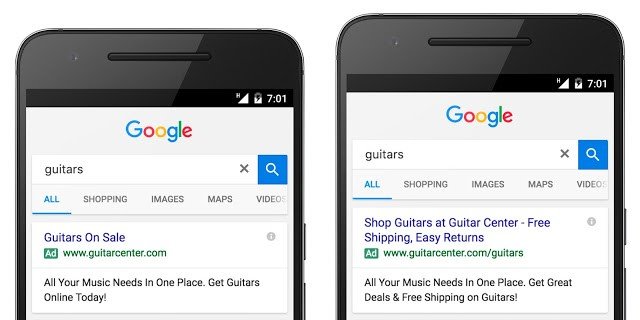 For now, the standard ads will continue to serve alongside expanded text ads. However, as of October 26th of this year, Google says, “advertisers will no longer be able to create or upload standard text ads”.  No date has been set when standard ads will be discontinued but it is recommended that advertisers begin getting familiar with the new format and test out some new expanded ads.  To help you get started, you can read up on the new best practices guide published by Google.

While there is less to be said about new responsive ads, the ads themselves will “unlock new inventory” across the Google Display Network (GDN) as the ads will adapt to their environment via the different content channels and screen size.  Responsive ads solve the question, “how many / which ad sizes do I need to create for my campaign?”.  By entering a 25-character and 90-character headline, a 90-character description line, an image and a URL, AdWords will automatically determine how the ad is displayed.  The ads themselves may appear as a native banner or as a text ad based on a site by site basis.  Unfortunately, it’s nearly impossible to preview how each and every layout of your ad will appear but you can view some common formats.  For more on creating responsive ads, click the link How to create.

Perhaps the biggest game-changer when it comes to the AdWords updates is the ability to set separate base-bid adjustments by device – mobile, desktop, and tablets.  The new control allows advertisers to manage the efficiency of device performance and optimize accordingly.  If an advertisers’ product or service has greater traction on mobile devices, or search volume spikes on tablet over desktop, enabling unique bids provides greater precision of ads. 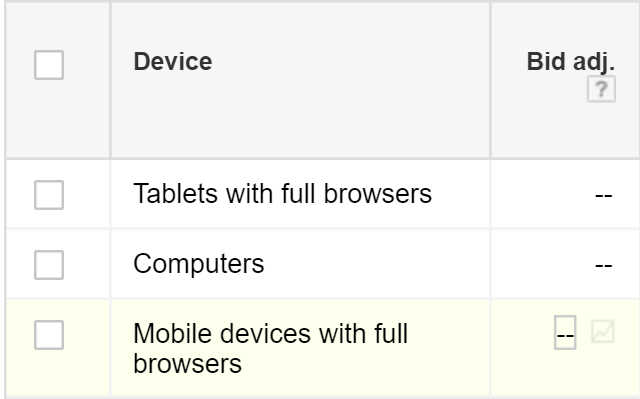 Bid adjustments can now be set for each device type at the campaign level in AdWords.

Of the three updates, device bidding could take the longest for advertisers to measure its impact.  According to Google, the new feature could take a few months to roll out before it is available for all accounts.  Still, it is something to watch out for.  Google will be hosting a live Q&A about device bid adjustments on August 9th, at 12pm EST.  Click here to register.