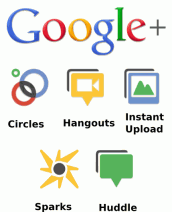 Is Google + all that, or another stubbed toe for Google in social media? Despite their dominance in search, Google has not had as much success in social media (see Google Wave and Buzz). That seems strange for a company that just reported quarterly revenue of $9 billion (that’s Billion, Austin Powers). However, with Google +, they may have a winner as they are adding users in record numbers. They reported 10 million users last Thursday and may double that number by the end of this week. Still a long way to go to rival Facebook’s 750 million worldwide users, but there are enough early signs to say that it is at least a possibility someday. Google introduced Google+ in late June so obviously it’s still very early. In fact, in order to hype the intro one needs to be “invited” to join.

Basically, Google+ is a social network, much like Facebook. Its Stream is similar to Facebook’s News Feed. But Google+ has some unique features. The biggest difference is the segregation of your contacts into various segments called Circles - work, friends, family, high school buddies - whatever circle one wishes to create. This makes it easier to send “appropriate info” to the specific audiences. There are no more concerns when your boss wishes to connect. Just put him/her into the work circle and be sure to communicate how hard you are working, how much you love your job, etc. while at the same time telling your friends in another Circle how brutal your job is and how your boss is a jerk. No worries. "Our goal is to make sharing on the web like sharing in real life," said Google CEO Larry Page in last week’s quarterly earnings call. "In real life we share different things with different people."  This is a step-up from Facebook for those who have the concern that all of their friends are privy to all of their information and postings.

Another differentiating feature is the forthcoming group video chat feature called Hangout, which allows a group of up to 10 to video chat.  Definitely different, and has significant potential!  There are also a couple of other interesting secondary features….Sparks, which lets you collect news and info about your interests, and Huddle, which lets some mobile users IM with their Circles.

In terms of business, it’s not at all clear what Google is going to do with their brand pages and what characteristics they may have. Obviously marketers are keenly interested in ways they may be able to promote their brands using Google +. Google might use some of its ad platforms on Google+, but that remains to be seen.

Will Google+ put a dent in Facebook? Maybe. Will it be the beginning of the end for Facebook? Unlikely. While it won’t replace Facebook, we think the introduction of Google+  is a significant one. We’ll be watching.