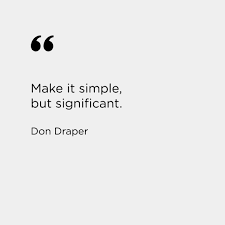 At the beginning of this month, nearly 40,000 people descended upon Omaha, Nebraska - yes Omaha. Why, you ask? They were there for Berkshire Hathaway’s annual shareholder meeting and for the chance to see its leader - Chairman and CEO, Warren Buffet. He is revered as one of the most successful investors of all time and often referred to as the “Oracle of Omaha”.

This got me thinking about the advertising industry, and our “Oracles”, past and present. Who were they and what legacies did they leave us. Here’s the list that came to mind.

Leo Burnett was an American advertising executive who founded his namesake, Chicago-based agency, Leo Burnett, in 1935. The agency is still with us today as part of Publicis Groupe. In 1999, Burnett was named by Time magazine as one of the 100 most influential people of the 20th century. Time called him the “Sultan of Sell”. He believed advertising should sell products and "if it doesn't sell, it ain't creative.” Burnett is credited with creating Kellogg’s Tony the Tiger, the underworked Maytag Repairman, the Pillsbury Doughboy and the Jolly Green Giant for the Minnesota Canning Company, a campaign so successful that the company eventually renamed itself as Green Giant.

David Ogilvy is often referred to as the "Father of Advertising" and sometimes an advertising “Wizard”. Before founding Ogilvy and Mather he was a chef, researcher and farmer in Lancaster County, Pennsylvania. He eventually gave up the serenity of the country for the bustling streets of Manhattan. His most famous campaigns were Rolls-Royce, Dove Soap and Hathaway shirts. He attributed the success of his campaigns to meticulous research into consumer habits, a discipline he honed while working at George Gallup's Audience Research Institute in New Jersey. In his book, “Ogilvy on Advertising”, he includes Research as one of the four basics principles of advertising alongside Creative Brilliance, Client Results, and Professional Discipline.

Yes, you read that right. Don Draper, also known as Richard “Dick” Whitman. He may be a fictional character created for AMC TV’s Mad Men, but he was Creative Director extraordinaire inspired by real life ad men Draper Daniels, who introduced us to the Marlboro Man while at Leo Burnett in the 50’s and by “I’d like to Buy the World a Coke” creator, McCann Erickson’s Bill Backer. Don’s philosophy of “make it simple but significant” is one that many successful ad men (and women) embrace. We thank Don for helping to make a career in advertising cool again, alongside his agency cohorts Roger Sterling, Peggy Olson, Harry Crane, among others. If you haven’t watched Mad Men, you should – it is definitely binge worthy.

Erwin Ephron is considered by most as the “Father of Modern Media Planning”. For those in media, his theories on media planning, research, targeting, reach and recency, have stood the test of time and continue to be referenced today. His book, “Media Planning, from Recency to Engagement” is a collection of articles that demonstrate his wisdom. He is probably best known for his “recency theory” to advertising which suggests that “advertising is most effective when it reminds people about brands they know when they happen to need the product”. Timing is everything.

Overall, this list is primarily a nostalgic one. Those included are icons of the industry who have left their mark on advertising, but unfortunately are no longer with us (yes, this includes Don Draper).

So are there modern legacies that continue to offer us their wit and wisdom? Deutsch’s Donny Deutsch. Sir Martin Sorrell, founder of WPP, the world’s largest advertising holding company. Mark Zuckerberg, co-founder of Facebook and Meta Platforms, Inc. Google creators Larry Page and Sergey Brin. These men will definitely be remembered for making their mark on advertising, like those who came before them.

There is one last advertising icon to add to the list. He has been part of MayoSeitz Media from its inception 25 years ago and a well-known and well admired name in the Philadelphia ad community:

Lonny is a “Gentle Giant” who started his advertising career in New York at BBDO guiding many of their largest accounts, including GE, DuPont, Polaroid, Pine-Sol, Armstrong, Pillsbury, and Campbell Soup. He made his way to Philly in the early 90’s where he was the President of Earle Palmer Brown, and it was there that he connected with MayoSeitz Media’s co-founder Ray Mayo. His passion for this business is as strong as it was back in his early days at BBDO. He is also passionate about music and the New York Yankees. He currently runs Strum Consulting and you can learn more about him on his blog “Strummings”.  http://strumconsulting.net/category/strumings/

It’s safe to say that every industry has its own icons, pioneers that paved the path forward for those that would follow. To places like Omaha and New York’s Madison Avenue, and many other places in-between. We’ll keep our eyes out for the “Oracles”, “Sultans”, and “Fathers” of the next generation.