Out-of-home (OOH) advertising revenue is expected to grow by 3-4%, per year, over the next five years, and is predicted to reach $33 billion by 2021, according to a MAGNA Intelligence study. The findings from the study show that the OOH market share will increase 10-12% in some countries, in comparison to other media categories that include Internet, TV, print and radio. According to a study from eMarketer, OOH ad spending in 2018 will continue to grow, rising to $7.78 billion from $7.67 billion. The report calls out that billboards, transit ads and cinema advertising are not as strongly affected by the shift to digital as other media, and that the continued adoption of digital billboards will help contribute to the format’s growth. 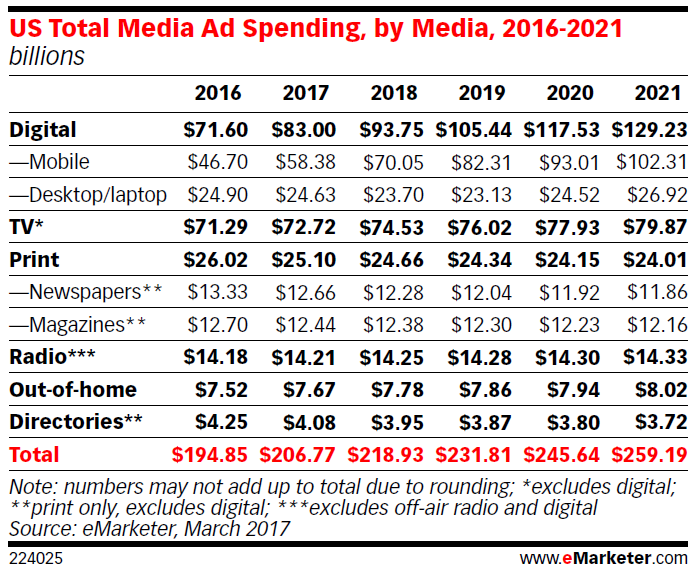 In January, Clear Channel Outdoor launched a private marketplace (PMP) with Rubicon Project, opening inventory on roughly a thousand digital billboards to programmatic through RTB pipes. Clear Channel Outdoor’s partnership with Rubicon is the closest development to a real-time OOH auction. "Programmatic buying has revolutionized the buying process in many key media sectors and we believe it will do the same for out-of-home," said William Eccleshare, Chairman and CEO of Clear Channel International.

Clear Channel Outdoor also introduced a targeting program called Radar that uses aggregated, and anonymous, mobile data provided by vendors such as AT&T. With that data, the company plans to score its inventory against 1,800 audience segments. "What we've done is leverage the mobile data to be able to identify people who are in the market for a car—where do they go, how do they move throughout the day and what are the opportunities to most efficiently engage with them," said Dan Levi, Clear Channel Outdoor CMO.

DOmedia and Rubicon Project partnered earlier this year to provide advertisers with programmatic access to OOH inventory. DOmedia’s supply-side platform is now connected to Rubicon’s programmatic exchange, making inventory available to advertisers around the world via hundreds of Demand-Side Platforms (DSP) and trading desks. “This partnership further allows us to reach vendors of all sizes to participate in programmatic OOH and help reach its full potential,” said Joe Prusz, Global Head of Revenue, Rubicon Project.

More recently, media seller TouchTunes took advantage of the partnership between DOmedia and Rubicon to provide advertisers with programmatic access to OOH inventory. TouchTunes has a network of 54,000 ad-enabled jukeboxes across the United States, representing 8 million impressions daily. Rubicon stated that TouchTunes advertisers would have access to use the music and entertainment provider’s data to target consumers by geography, time of day, music genre, venue type, and language. “These types of integrations [will] allow OOH to be bought apples-to-apples alongside TV, radio and internet advertising,” said Ken Sahlin, CEO of DOmedia.

Purchasing OOH programmatically is definitely going to be a game-changer for the industry moving forward. It also indicates how digital has influenced the advertising industry as a whole, and that embracing its technologies can help make out-of-home strategies more targeted and effective.