In 1981, the director of public relations at Coca-Cola, Anthony Tortorici suggested that the "three most believable personalities are God, Walter Cronkite and Bill Cosby." He was justifying the giant checks being paid to Mr. Cosby to endorse Coca Cola. And they sold a lot of soda in the 80's.

So, how important are celebrity endorsements in 2016? How relevant are they when more and more famous people are falling from their pedestal?

Let’s start with the Super Bowl. You may have noticed that Steven Tyler was in a Skittles ad. Steven Tyler is almost 70 years old and has contributed little to the world of music since 1987. Few consumers of Skittles know anything about Steven Tyler other than the fact that he was a judge on American Idol, but the Skittles marketing team sat around a conference table and discussed which celebrity to use for a Super Bowl ad that would be seen by every human being in the solar system. They picked Steven Tyler. Why?

With the end of the traditional shared viewing experience on TV, the widespread recognition of this medium’s recent celebrities has diminished. When the Cosby show did a 35 share, Jello couldn’t pick a more universally known and respected person to sell pudding. Now the top network shows do a much more fragmented reach, so the stars are less relevant.   Perhaps that explains why so many celebrity endorsers are found in Mr. Tyler’s generation like Sally Field, George Clooney and William Shatner. Or beyond! Frank Sinatra is selling Jack Daniels from the hereafter in these spots.

An article by Grant Johnson, published in Chief Marketer explains that that “perhaps using stars in marketing is done so frequently because it is the easier path to take”. He goes on to question who are the celebrity spokespeople for Microsoft, Amazon, BP, Google, Toyota and Honda? Even though these are all high-profile global brands, they are not endorsed by a celebrity. He concludes, “their messaging and positioning are what makes them successful and meaningful brands to their customer base”.

Nielsen Talent Analytics and Nielsen TV Brand Effect published a study of the most-liked celebrity endorsers during the first quarter of 2015. They found that Liam Neeson, who starred in a spot for Supercell Games, was the most likable endorser, favored by 78% of Americans who were aware of him. Pierce Brosnan (Kia Motors) and Matthew McConaughey (Lincoln Motors), rounded out the top three and were liked by 75% and 74% of those who knew them, respectively. 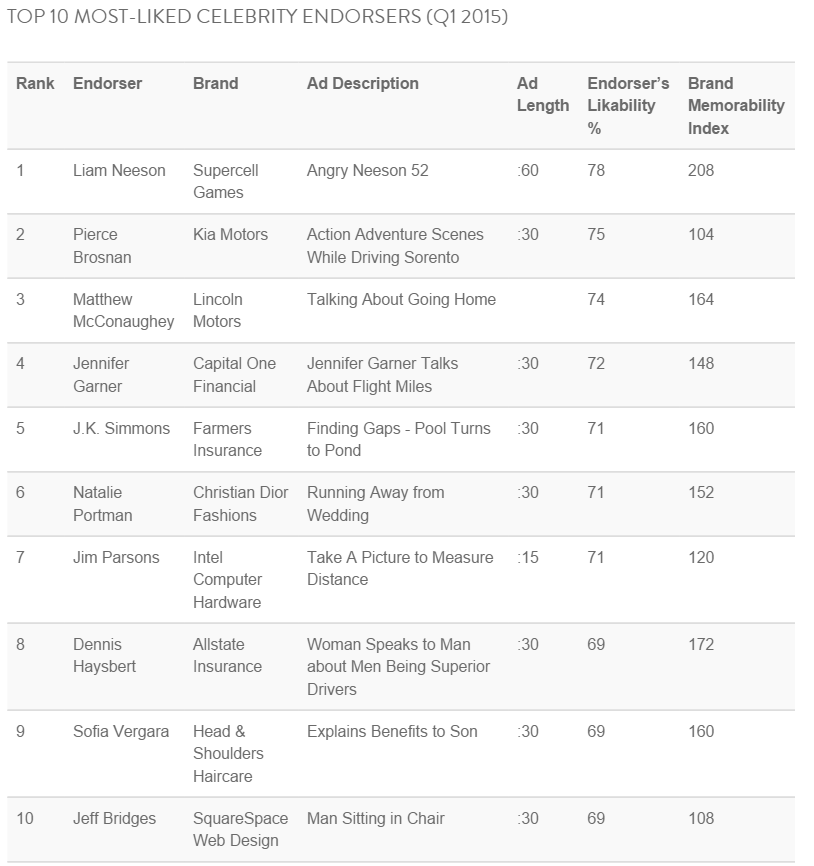 So do the celebrities propel the campaigns to success? Or is a big budget campaign like the one frequently planned around celebrity endorsers strong enough to succeed without the celebrity? Do these brands have strong enough equity to rely on their own credibility and messaging to gain attention and create appeal?

“Ricardo Montalban is Spanish, so he must be an expert in fine Corinthian Leather! I MUST purchase a Chrysler Cordoba immediately!”

…and more about aspiring to the coolness and lifestyle of the celebrity:

“Daniel Craig wears an Omega watch and I want to be an international spy/chick magnet like him!”

So endorsements will likely remain with us as long as there are celebrities, but the future may be with consistent brand ambassadors who aren’t famous for anything other than their advertising persona. Flo from Progressive, Mayhem from Allstate, The Most Interesting Man in the World, Lilly from AT&T, and Jan from Toyota have become celebrities thanks to their ads instead of the other way around. After all, while the actors who portray these characters may go through their own private life disasters, the on screen characters they portray will remain as consistent as ever.