While many marketing efforts tend to target the popular 18-49 cohort, they may be missing out on a significant portion of potential customers. 50% of the U.S. population will be age 50+ in only 5 years time, and these consumers spend nearly 50% of all CPG dollars. Even with all this spending power, less than 5% of advertising is currently geared to the demographic. 80 million Americans can be defined as Baby Boomers (born between 1946 and 1964) and  Nielsen recently took a closer look at the opportunities offered by this audience, whom they dubbed "The Most Valuable Generation." 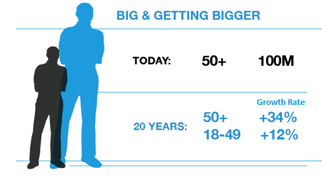 Nielsen reports: "In the next five years, Boomers are set to control 70 percent of the disposable income in the U.S. What’s more, they stand to inherit $15 trillion in the next 20 years. As they age out of the work force, 67 percent of Boomers plan to spend more time on their hobbies and interests, moving from a life dedicated to making money to one that is directed to spending money. This lifestyle requires two simple ingredients: money to spend and the time to spend it. The Boomer is a dynamic consumer and a very valuable one. It’s clear that taking their loyalty for granted, or forsaking them for being too loyal or set in their ways, are both risky approaches for marketers."

Boomers are also not absent from the technology sector. While they are generally not early adopters, their heavy adoption of mainstream technology drives its growth. Boomers are surprisingly active with internet-linked gadgets, and use them to stay connected, shop, and for entertainment. Marketers can identify these technologies and channels to best reach the invaluable boomers. We'll be keeping a close eye on this growing audience.