The addictive social network Pinterest has grown increasingly popular in recent months. The website describes itself as an online pinboard, allowing users to post and organize images of everything and anything, from fashion trends to interior design ideas to favorite books. These pins can be organized into boards, or descriptive groups such as ‘Places to Visit’ or ‘Wedding Ideas’, which can be shared and followed by your social network.

Pinterest is a unique opportunity for brands as it is relatively untouched by advertisers and users are highly engaged and eager to share. The marketing team at Chobani Yogurt noticed that Pinterest users were sharing pictures of their favorite Chobani treats and recipes, and decided that the brand could take an active role in hosting that conversation. The Chobani Pinterest account has nearly 20 boards and gained over 1,000 followers in a matter of weeks. The boards serve to convey the brand’s positive, healthy tone and provide fans with recipe ideas. As Pinterest is often used as a discovery vehicle, users searching on various foods are able to find these recipes and connect with the brand in a way that isn’t overly promotional. 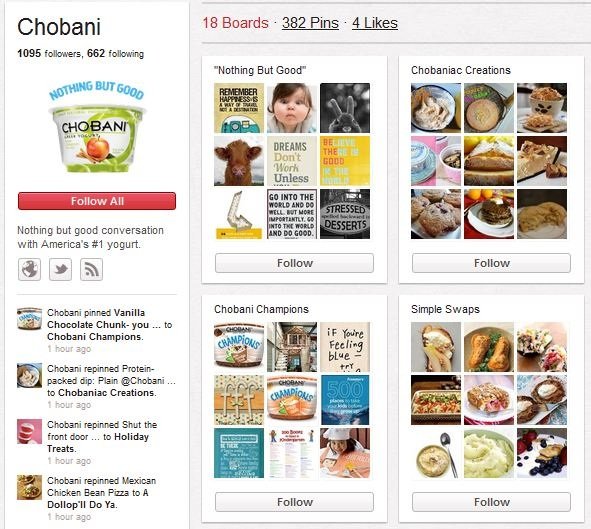 TV brands are also starting to take advantage of the social network. The Weather Channel, Travel Channel, and Food Network are all actively using Pinterest to communicate with their fans. While the Food Network lends itself to Pinterest as users are inherently sharing recipes and photos of their culinary creations and Travel Channel fans are sharing pictures of their trips and favorite places, other channels have had to be more creative. The Weather Channel, for example, has unique boards which include anchor photos, weather facts, and even cold-weather recipes.

Last week, SearchEngineWatch highlighted several ways brands can effectively engage with their customers on Pinterest, including:

1)      Hold a contest, such as Lands’ End’s ‘Pin it to win it’ contest where customers created boards of their favorite Lands’ End styles to win prizes. Wish lists and photo hunts could also be executed as contests on the platform.

2)      Feature customers on brand pins by repining and commenting on their purchases, designs, or ideas.

3)      Conduct market research by introducing new products or ad campaigns on Facebook to gauge initial reactions. The Pinterest audience is smaller and more targeted than other social networks, with demographics of the site skewing young and largely female.

Have you seen brands using Pinterest in creative ways, or do you have ideas for creative executions? Share your thoughts in the comments. We always appreciate feedback.