Instead of simply hearing a radio ad on a bus, what if you could smell that ad during your commute? It's not just an idea- it's a reality in some parts of the world. Companies are continually innovating new ways to connect with their customers and deliver targeted messaging. Some brands, like Kotex and Dunkin Donuts, have embraced and incorporated new technology into their ad campaigns. Others, like Coca Cola and McDonalds, used common items like reflective tape and vending machines to create unique, interactive advertising experiences. Below, we take a look at 4 innovative marketing experiences identified by PSFK.

The campaign enhanced a traditional radio ad by pairing it with the scent of coffee. In South Korea, a coffee aroma was released from atomizers installed on commuter buses when a Dunkin Donuts radio ad was played. The atomizers were activated by sound recognition technology. The campaign reinforced the sensory connection involved with the Dunkin brand and had positive effects on store traffic- over 350,000 people experienced the campaign, increasing store visits by 16% and sales by 29%.

Hug a Coca Cola Vending Machine to get Free Soda

As part of Coca Cola’s international ‘Open Happiness’ campaign, the brand placed iconic red and white vending machines with the words ‘Hug Me’ written across the front on the campus of the National University of Singapore. The machine responds to physical hugs by dispensing a free can of Coke. The machine was designed was designed as a clever branding play to spread their message that ‘happiness is contagious’ and create word of mouth buzz across the campus and beyond.

The marketers at Kotex looked to capitalize on the viral power of Pinterest- and succeeded. The campaign targeted 50 active Pinterest users by creating custom boxes containing gifts related to their Pinterest interests as well as new Kotex designs and delivering the boxes to the user’s doors. Upon receiving the packages, the women shared the details of their gifts with their large Pinterest networks, resulting in nearly 700,000 total impressions. 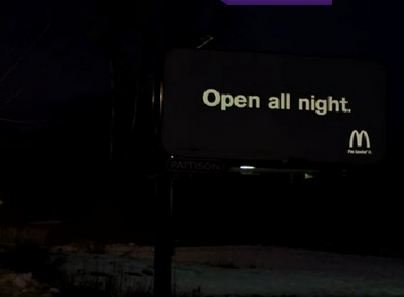 McDonald's was challenged with driving hungry, late-night motorists to their restaurants. To accomplish the task, the company created a billboard using reflective tape which, while seemingly blank during the day, would reveal a message during the night when car headlights shone on the board. The words "open all night" along with the McDonald's logo were used on the billboard to let motorists driving at night know that they can stop at the fast food chain at any time.

What are your favorite innovative creative executions? Leave your thoughts in the comments below.