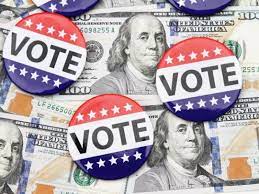 Yes, that probably was a political ad that just popped up on your screen and it won’t be the last. Believe it or not, four years have gone by and once again midterm elections are upon us. Soon you will be bombarded with even more political advertising and despite your personal beliefs on this subject, it poses a big threat to traditional advertisers whose campaigns will be overshadowed by multi-million dollar political placements.

Just ten years ago, national political spend was in the $4 billion range and this year it is expected to reach $7.8 billion. Obviously ad prices have gone up over the years, but this is still a huge increase considering this is only a midterm election. Broadcast TV, including local markets, could potentially receive half that spend followed by cable/satellite, Facebook, Google, radio and OTT-CTV (non-subscription and connected TV services). Now that one in three Americans no longer have traditional pay TV, political advertisers will most likely spend more this election year on digital TV (CTV) than desktop, mobile and tablet combined.

History has shown that political spend in each market is different depending on the importance of the race or issue. The top 5 markets expected to get hit the hardest this year is Pennsylvania, Florida, Arizona, Georgia and Wisconsin. In Philadelphia alone, an estimated $1.3M has already been placed in the month of July which includes advertisers such as Planned Parenthood and Josh Shapiro for Governor. In addition, several political action groups have already reserved time on stations in August and September. Q3 spend is expected to exceed 2018 levels by 103%. Since the Governor’s race is polling closely and the US Senate race is headed that way as well, Philadelphia should receive the largest spend compared to any midterm year with Q4 expected to reach the $60M mark.

Like most years when heavy political spend is expected, station inventory is compromised. Usually news day-parts and older skewing prime programming is in high demand and despite traditional advertisers booking early, political advertisers are still guaranteed the lowest unit rate. There are ways to lessen the blow on existing and future campaigns during these crazy months. Sports or News sponsorships are always guaranteed to run as well as video streaming campaigns that provide brand safety and a nice extension to linear TV. Other alternatives would be to increase terrestrial radio, audio streaming and Out of Home (OOH) spend to help lessen the pressure of the unforgiving political window.

Of course political marketing and advertising are constantly evolving. With the growth of social media and the advancements in data analytics, all spend predictions can change overnight. The integration of traditional and social media is helping candidates find new ways to market themselves, which means news ways to spend their budgets.

Either way, fasten your seatbelts! It’s going to be a bumpy ride.