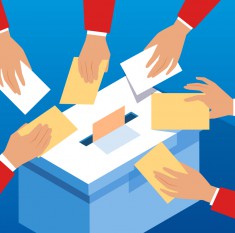 The Election's Impact on News Viewership

Since Donald Trump announced his run for President in 2015, there has been a resurgence in news channel viewership. For Trump’s first republican debate, Fox’s GOP Debate recorded an impressive 24 million viewers. For comparison, the first GOP primary debate in 2012 attracted 3.2 million viewers. This first GOP debate drew a larger audience than most of the NFL games that year, the MLB World Series Games and even “The Walking Dead” Finale.

As the presidential campaign narrowed, the interest continued to grow; the first debate between Donald Trump and Hillary Clinton averaged an audience of 84 million viewers across 13 networks. Pulling in viewership numbers similar to that of Ronald Reagan and Jimmy Carter’s 1980 Presidential Debate, which was 35 years prior. The last two remaining debates between these parties averaged 66.5 million viewers and 71.6 million viewers respectively.

The news ratings growth momentum sustained once Trump took office. For 28 consecutive months, Fox News Channel (FNC) has been the number one cable channel for total day viewership. Additionally, this October FNC was the top basic cable network in Primetime viewership for the 5th consecutive month with 2.8 million total viewers. FNC is drawing more viewers than its competitors, CNN and MSNBC, in a news-filled month, while also beating ESPN in a heavy sports month. This truly shows the impact on politics leading up to Election Day.

While FNC has been the top-cable network from 2016 through October 2018, it is worth noting that MSNBC has also had significant growth. MSNBC’s best year yet was in 2017 when they increased their prime-time viewing by 550,000 YoY. In the first quarter of 2018, it was the second most watched cable network in both prime time and broadcast day. This helps illustrate that both sides of the aisle are tuning in to get political coverage.

Cable networks are not the only media entities benefiting from the political climate. Broadcast networks continue to pull in impressive audience numbers for major news events. The March 2018 Anderson Cooper interview with Stormy Daniels averaged 22 million viewers, a larger audience than the Grammy’s and Golden Globes.

In April, the interview between George Stephanopoulos and former FBI director James Comey averaged 9.8 million viewers making it the most-watched program on ABC News since the Caitlyn Jenner interview three years prior. By comparison, there were 3.6 million more viewers in the Sunday 10-11 p.m. time period than the previous week.

From an advertising perspective, the networks and local stations are reaping the benefits of the heated political races. Third Quarter advertising in the United States grew 4%, primarily because of heavy political ad spending ahead of the 2018 midterm elections. In local markets, revenue shot up 9%.

As we close out this political window and reflect on the surge in news viewership there is no denying the impact and fascination drawing audiences to constant political coverage. While traditional TV is facing more competition amongst streaming video, social and other platforms, the demand for this coverage will continue to pace strong. It will be interesting to see how the networks continue to progress post today’s elections.