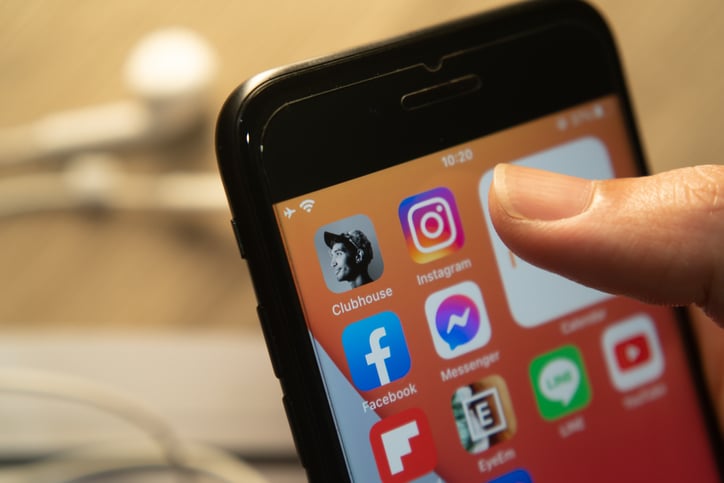 Posted by Tammy Catelli In No Comments

Did you join Clubhouse yet?

Over the past year, we were hit with a really big curveball. Our daily lives were completely turned upside down by a virus that forced us to quarantine in our homes and prevent us from seeing our family and friends. Things we often take for granted, like meeting a close friend for dinner or grabbing a cup of coffee with mom, were no longer an option. As these simple pleasures were abruptly taken from us, we searched for ways to fill this social gap, and for some, the answer was Clubhouse.

Unveiled last spring by tech-industry veterans, Paul Davison and Rohan Seth, the app started out more like a podcast, but the tech duo quickly decided to move away from the broadcast-type vibe and gave its listeners the ability to actually join the conversation. The New York Times stated that Clubhouse is like the 2021 version of AOL Messenger and an old-fashioned party line. For those of you who don’t know, Clubhouse is a social networking app that allows people to gather in audio chat rooms to talk about various topics, such as sports, wellness, and pop culture, just to name a few. The rooms are divided into two groups, those who are talking and those who are just listening. I know you are probably thinking this sounds a lot like Twitter, but it’s not. Unlike Twitter, there is no text involved and it’s simply just people talking to one another. There is a moderator assigned to each room who allows others to participate in the discussions and even removes those who clearly have nothing nice to say. Also, you have to be invited into the app by someone already involved in the discussions.

Clubhouse has gained popularity even among big names like Drake, Tiffany Haddish, and Elon Musk. Imagine being in a room talking about cars and all of a sudden the creator of Tesla chimes in. According to NBC News, in less than a year, Clubhouse has grown from a few hundred users to 10 million and counting. With its increasing popularity, other apps are concerned their users may jump ship, but keep in mind that scale is an important factor. Clubhouse would have to multiply its user base several times over to contend with the big players. Twitter has already started a feature that replicates Clubhouse called Spaces, and Facebook is in the early stages of creating a similar option. Before we know it, Instagram, Snapchat, and TikTok will join the bandwagon. The social media landscape is constantly changing and similar apps like Clubhouse will emerge and disappear, but for now, users are giving it a chance because it’s really the first app made for humans to stop typing and start talking. If it can improve in scale and still maintain its “clubhouse” appeal, it should do just fine. Like most apps, there are still a few kinks to figure out, including how to handle negative hate speech and content in real time, and ways to improve the algorithms so that users can be steered toward conversations that interest them and ultimately encourage their participation.

Senior media reporter, Dylan Byers, said in his NBC News article, “What has been special about Clubhouse to date is a sense of relative intimacy and respect among participants.” His words surely speak the truth, and if this app can provide an outlet for its users to help ease the anxiety brought on by the craziness of this past year and the uncertainty of what lies ahead, then I think we could definitely all use a friendly conversation right about now.